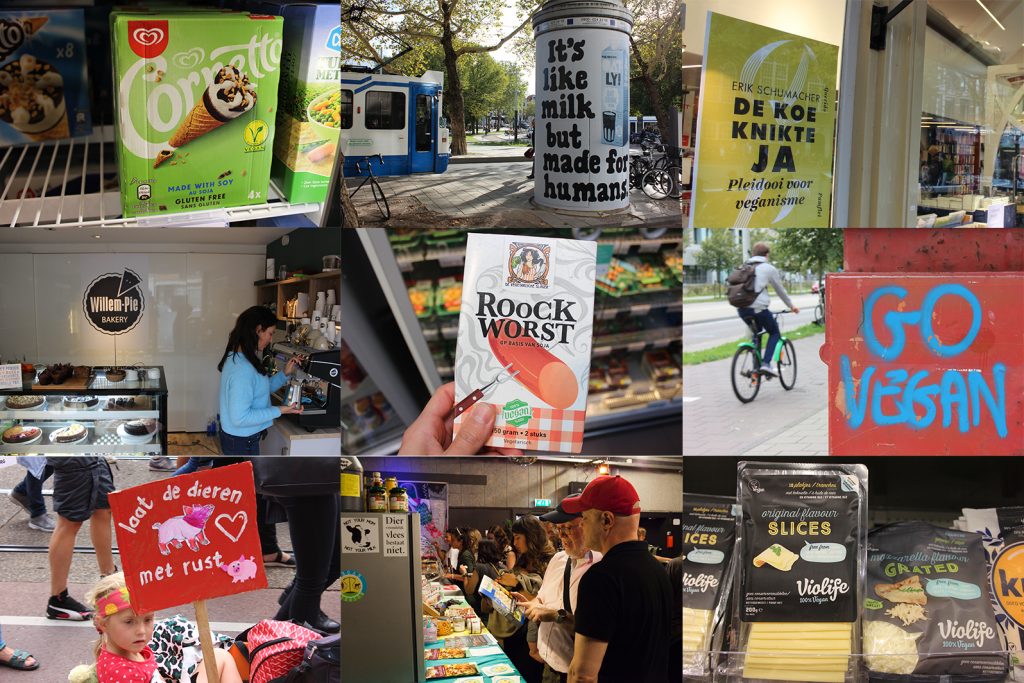 We also noticed more specifically vegan products in supermarkets, with some supermarkets even creating whole vegan fridges or shelves. Several manufacturers even dedicated huge nationwide ad campaigns to the promotion of their vegan products. Also many vegan events took place, from vegan outreach to big festivals. Get ready for 2018 in review!

In 2018 an exceptional amount of 100 % vegan restaurants opened (8!). These times vegan restaurants are doing so well that they’re able to open up new locations. Vegan Junk Food Bar opened a new location in Amsterdam East, and today another one at Reguliersdwarsstraat. From the same owner also Kebabi opened, a proper bar that serves vegan kebab and other fastfood. Meatless District expanded with a second location in De Pijp. From the owner of Dophert the new restaurant Deer Mama opened some weeks ago also in De Pijp.

Bakery Willem-Pie, whose vegan cakes were already making their way into Amsterdam restaurants and businesses, opened up a temporary cake cafe at Amsterdam Zuid. But don’t worry, they will be there until summer so plenty of time for a visit! In the west of Amsterdam Vurger opened, offering vegan burgers but also döner kebab, saté and churros! All glutenfree as well. Bonboon opened recently at KNSM-eiland. A small restaurant with delicate dishes in a more fine dining style.

Vegan cuisine is considered as a growing trend in hospitality, reflected by also non-vegan restaurants putting more vegan options on their menus. Plant-forward or plant-centric restaurants are those whose standard menu is vegan, but with the option of ordering non-vegan side dishes. Earlier this year restaurant Yerba opened at Amsterdam Zuid, getting raving reviews and is even included in the 2019 Gault Millau guide! At Bilderdijkstraat Soil opened, who are offering healthy seasonal bowls, their standard dishes being all vegan as well.

Other notable restaurant happenings of the past year include the fun and fully vegan pop-up Sproutsiders at Rivierenbuurt, the opening of vegetarian/vegan take-away shop Health Food Wall, falafel chain Maoz going fully vegan in Amsterdam and the recent opening of the second location of vegan-friendly restaurant The Meets.

Finding vegan pizza in Amsterdam is definitely not an issue anymore in Amsterdam. Of course there were the two locations of pizza joint Mastino, but with New York Pizza and Domino’s also offering (and advertising!) vegan pizza, it became a lot more mainstream. And yes, this includes delivery service. This year also Jumbo offers freshly made vegan pizza in many of their supermarkets, and ready-made pizza by Mastino is available at several Marqt stores in town.

If there would be one product vegans were looking forward to this year the most, it’s without a doubt the introduction of vegan flavours of Ben & Jerry’s icecream. There are currently three, and a fourth one is on it’s way. Also the vegan ‘magnums’ by Valsoia became available widely at bigger Albert Heijn and Jumbo supermarkets. Also vegan cornetto’s became available, and Alpro introduced several vegan icecream flavours.

Other noteworthy products are vegan Bailey’s, the AH Basic Croissants, several kinds of vegan mayonaise and too many to mention new vegan meat alternatives. Yes all these processed foods are not necessarily healthy and are hopefully not the only thing you eat, but they sure make it easier for people to eat less animals! Tip: for a quick overview of vegan supermarket products, follow Huh Is This Vegan? on Instagram!

We kicked off in May with the Vegan Amsterdam Festival we organised. A full day with motivating lectures, some of the finest vegan food around and uplifting music in between. In June Veggie Festival Amsterdam took over NDSM wharf. Vegan Food Festival Amsterdam took place in July at Westergasfabriek for two days, being well advertised with posters all over town. Funky Vegan Festival happened at urban beach spot Dok Amsterdam.

Some big protest marches happened this year. The March to Close Down All Slaughterhouses is a demonstration held for years in various cities worldwide. This year was the first time it was held in Amsterdam, organised by our friends of Bite Back. Later in summer the Offical Animal Rights March Amsterdam took place. Next to these events Anonymous for the Voiceless has been super active this year, educating people about veganism through their Cube of Truth actions.

Last week the news came out that lunchroom/store Vegabond will be opening a second location in February at De Clercqstraat, Amsterdam Oud-West. We can expect the availability of offical vegan Magnums (!), since they have already been spotted in Belgian supermarkets. De Vegetarische Slager announced a while ago their aspiration to make all their products vegan by the end of 2019, hopefully this won’t change with their recent acquiration by Unilever.

Funky Vegan Festival recently communicated “2019 date(s) will soon be announced!”. Also Vegan Food Festival Amsterdam will return next year. From our side, our screening of documentary The End of Meat in January is sold out by now, but you can expect more cool events to come in 2019! Have a happy new year!