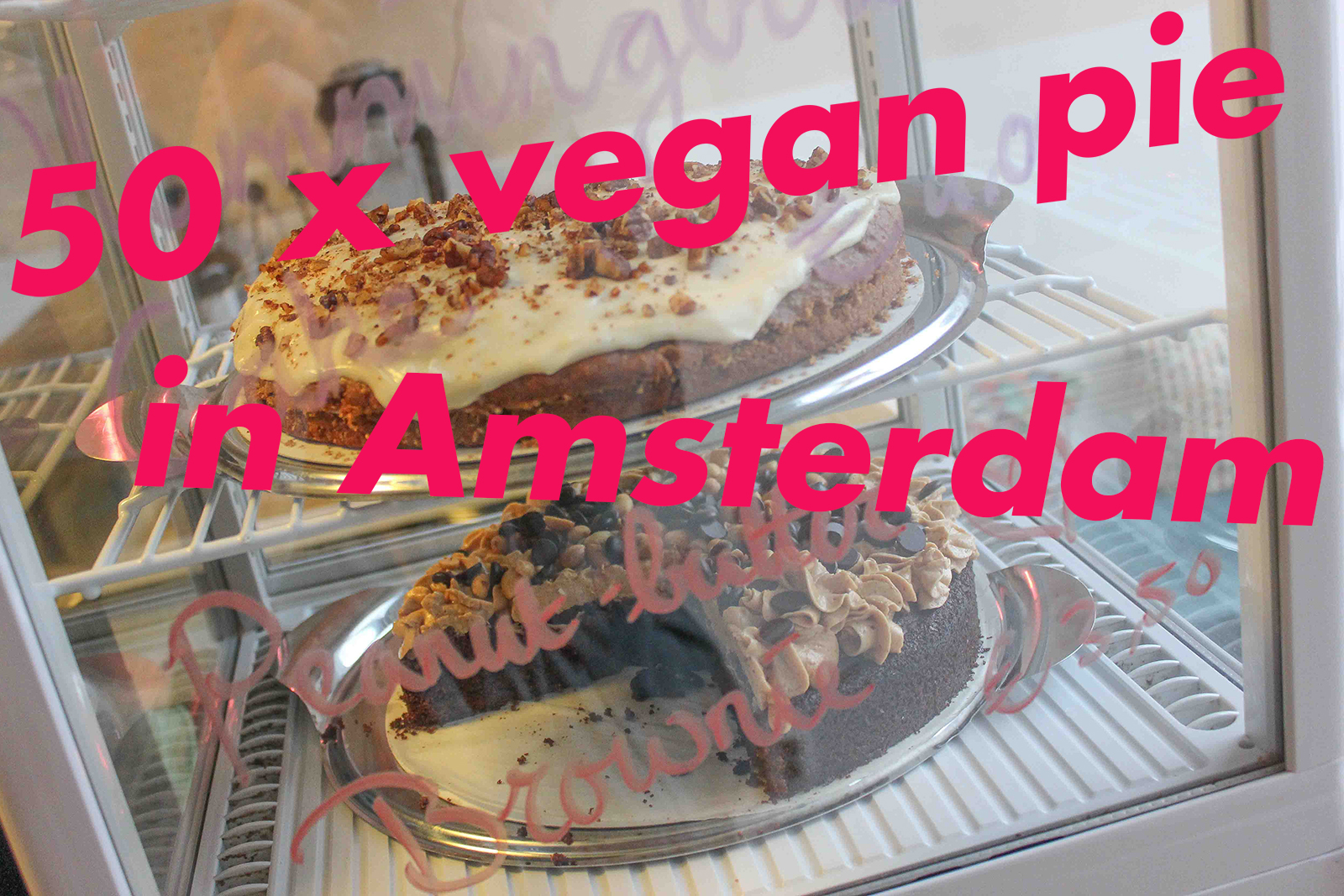 Say you want to celebrate so vegan pie is asked for! But where do you go? While there used to be only a handful of places (restaurants) which would offer it, these days it seems like no new cool coffeeplace can do without offering some vegan sweet stuff. Great! This is a list of all places which are currently offering vegan pie. And we’re talking ’bout the real stuff, no ‘raw energy balls’ or granola bars, please!

Vegan lunchroom/bakery specialised in cakes! They also do a vegan high tea. One of our most favourite places in town, right next to Westerpark.

Vegan lunchroom and more (also breakfast and a few nights a week dinner) with a great menu and various homemade vegan cakes, donuts etc. At Spaarndammerbuurt.

Vegetarian buffet restaurant with plenty of quality homemade vegan pies to choose from, both in the buffet as well as in the pie fridge near the counter. At Czaar Peterstraat.

Vegan grocery shop and lunchroom in the centre. Sells homemade pies, brownie bij Lariekoek as well as donuts and cakes made by the magnificent Nono Cakes.

Always a different selection of mostly vegan pies at this cozy vegetarian restaurant, beautifully located at the Prinsengracht. One of the oldest vegetarian places in Amsterdam.

Alchemist Garden
Raw food restaurant at Overtoom with a raw pie option.
Amsterdam Cupcake Company
Bakery at De Baarsjes with vegan (and glutenfree as well) cupcake and pie options.
De Bakkerswinkel
Bakery cafe with three locations in town. The one at Westergasterrein has a vegan apple-abricot-pear tart on the menu.
Coffeeshots
Coffee place at Spaarndammerstraat, stuff by Nono Cakes.
Day Made
Coffee place / gallery at Jan van Galenstraat, also cakes by Nono Cakes!
Dutch Weed Burger Joint
Vegan fastfood place close to Kinkerstraat. Has several sweet options including ‘tompouce’, donuts and a fudge brownie which is to die for!
Fruittuin van West
Organic orchard with farm shop and small cafe. Always a vegan pie on the menu. On the western edge of the city.
Loving Hut
No nonsense vegan place in Bos en Lommer with always vegan pie on the menu.
Meatless District
At vegan restaurant Meatless District (Bilderdijkstraat) they offer vegan pies from Dophert!
OKO Cultural Melting Point
Multicultural creative hangout/restaurant at Bos en Lommer. Vegetarian/vegan food, vegan brownie on their menu.
Raw Betty
Betty makes vegan raw cakes and other stuff. Usually on Saturdays at Mercator market or Ten Kate market, check her Facebook for more info!
Sugarless
No refined sugars are being used in the kitchen of this lunchroom. Also vegan options including pie. At Bilderdijkstraat.
T’s Teabar
Loose leaf tea, coffee and raw cakes by SharpSharp at this tearoom at Jan Evertsenstraat.
Wijs West
Store/lunchroom for kids and their parents, at Bilderdijkstraat. Raw cake by SUE on the menu.

Zaanse Bakkertje
Bakery with LOTS of vegan cookies, pastries, pies, bread. Not located in Amsterdam itself but just a 20 minute trainride away, north of town.
Vegan High
“Where can I get vegan spacecake?” One of the most asked questions by vegan visitors of Amsterdam. Vegan High makes space brownies and other stuff, available on order only.
Mumu to the Moon
Specialised vegan chocolate store at De Pijp. Doesn’t necessarily has vegan cake but lots of homemade chocolate based sweet stuff!

Do you know a place which offers vegan pie but is not mentioned? Please let us know in the comments!