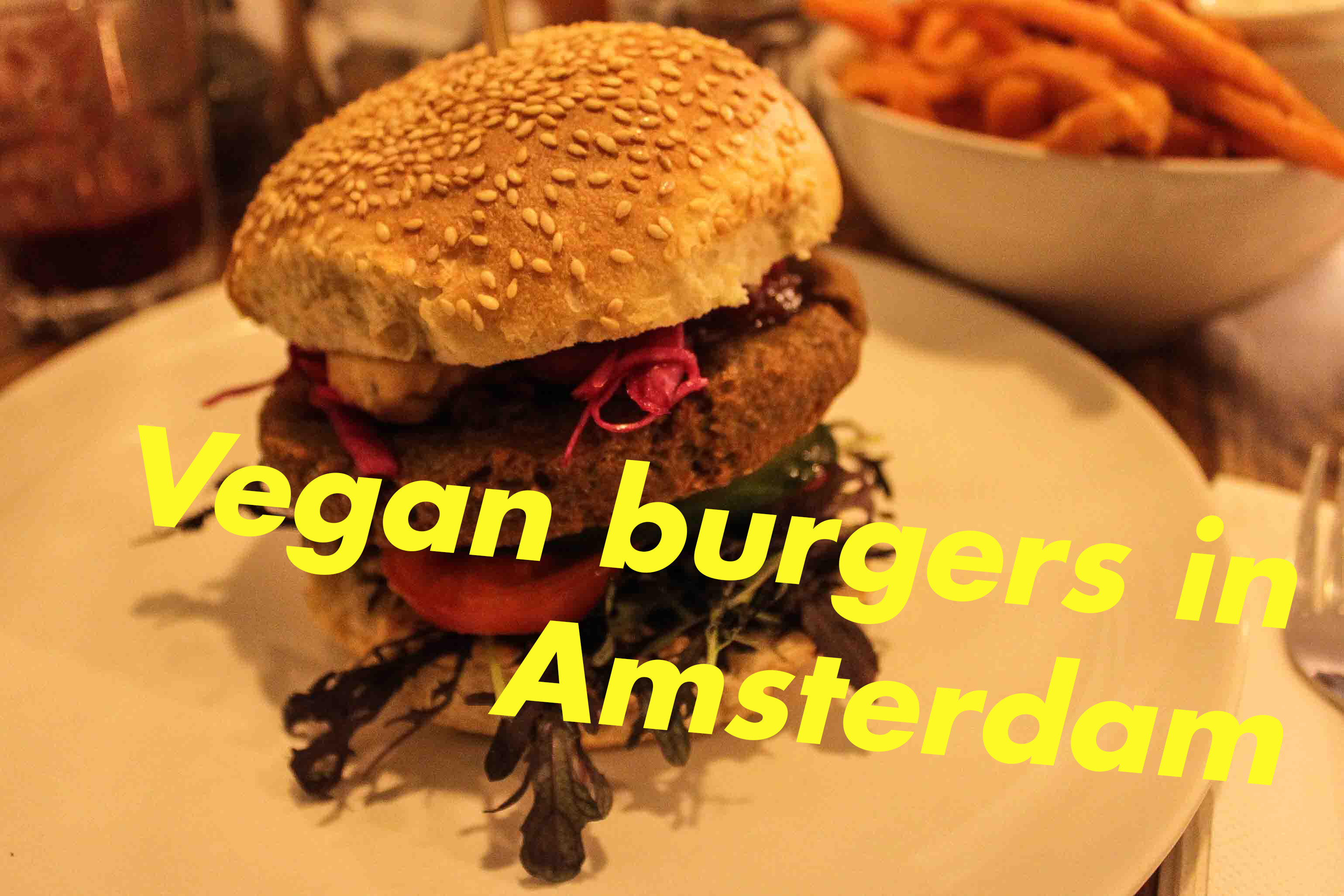 A burger – simple in its parts but so satisfying as a whole if done well. Perfect summer food! And wait, tomorrow it’s International Vegan Burger Day! These days it’s so easy to find all kind of vegan burger patties in the supermarket. But even better, the following restaurants have a vegan burger on the menu!

Original VJFB Burger and its big brother the Notorious SUMO. Unquestionable the most photographed vegan burger in town, available at this just opened place a stone’s throw away from Overtoom.

Without a doubt the most consumed vegan burger in the country. A steady vegan option at many festivals and also available at many restaurants allover the country. They’re opening their own place beginning next month!

Home of the ‘Meatless District burger’, easily recognisable by the signature streak of tomato ketchup. 😄

Beloved vegan lunchroom, also open some evenings. They have their signiture Dophert Burger on the menu (homemade patty made from chickpeas and broad beans) as well as a Quinoa Burger. Thursday night = burger night with special prices.

At Asian/fastfood restaurant Loving Hut they have an uncomplicated vegan burger on the menu, with optional vegan cheese.

At the two locations of Roots they offer two kinds of vegan burgers, with homemade patties! Pick the Beet Burger or the Italian Burger.

Chef Izaba Rodgers has various vegan burgers on the menu of his restaurant Terrazen, including ones with tempeh and vegan chicken!

At burger restaurant Soul Burger they have a vegan ‘aged beetroot’ burger on the menu!

Bar James has a Carrot Burger on the menu, served with sweet potato fries.

The following places also have a vegan burger option on the menu!

Beer & burgers! Brouwerij Troost has a vegan burger on the menu, made from kidney beans and other veggies.

At restaurant Traffic, close to Stadionplein, they serve a burger made from mushrooms and legumes.

At Burgerfabriek in the city centre they have a ‘Vege-Burger’ on the menu which is vegan without the mayo.

Build your own burger at Bar-B and choose from four different vegan patties!

At brunch café Ted’s Place the ‘Naked Veggie Burger’ can be made vegan without the feta and the yogurt.

Three different veggie burgers at Ellis Gourmet Burgers, looks like they could be vegan but has to be confirmed still.

At the three locations of Aussie inspired restaurant Drover’s Dog their ‘Beetroot, Chickpea & Lentil Burger’ is vegan if you replace the brioche bun for a ciabatta and skip the aioli.

Know of any other places in Amsterdam which have a vegan burger option? Please let us know in the comment section and we will add them to this list!