The changes in Amsterdam have not gone unnoticed, newspaper NRC highlighted several developments in a big article last summer, also quoting yours truly.  But hey let’s have a look at this year’s developments!

2019 is definitely the year of artisanal vegan cheese. While various brands of vegan cheese have been available at supermarkets and organic stores for years, they are usually the type you put on bread and are very processed. This year we witnessed more and more so called ‘artisanal’ vegan cheese producers in Amsterdam, small companies who make vegan cheese typically from nuts and specific bacteria. The ingredients differ but the process of making it is the same as animal cheeses. Watson, Rosie & Riffy, Yerba, Max & Bien and Willicroft (formerly known as Plant Based Cheese) are all local vegan cheese makers, find their products a.o. at Little Plant Pantry, Vegabond and Willicroft.

While we love supporting small vegan businesses, buying a whole vegan pie here could easily cost you €50. In 2019 both Hema and Jumbo introduced very affordable vegan pies (apple-crumble and cherry-crumble respectivily) making throwing a birthday party so much easier. Also national chain Multivlaai introduced some vegan pastries and we recently discovered Henny’s Homemade, a store in the centre offering many vegan baked goods. Last but not least Nono Cakes and Willem-Pie both opened up a store in 2019! Both outside the city centre, veganism is also spreading geographically! 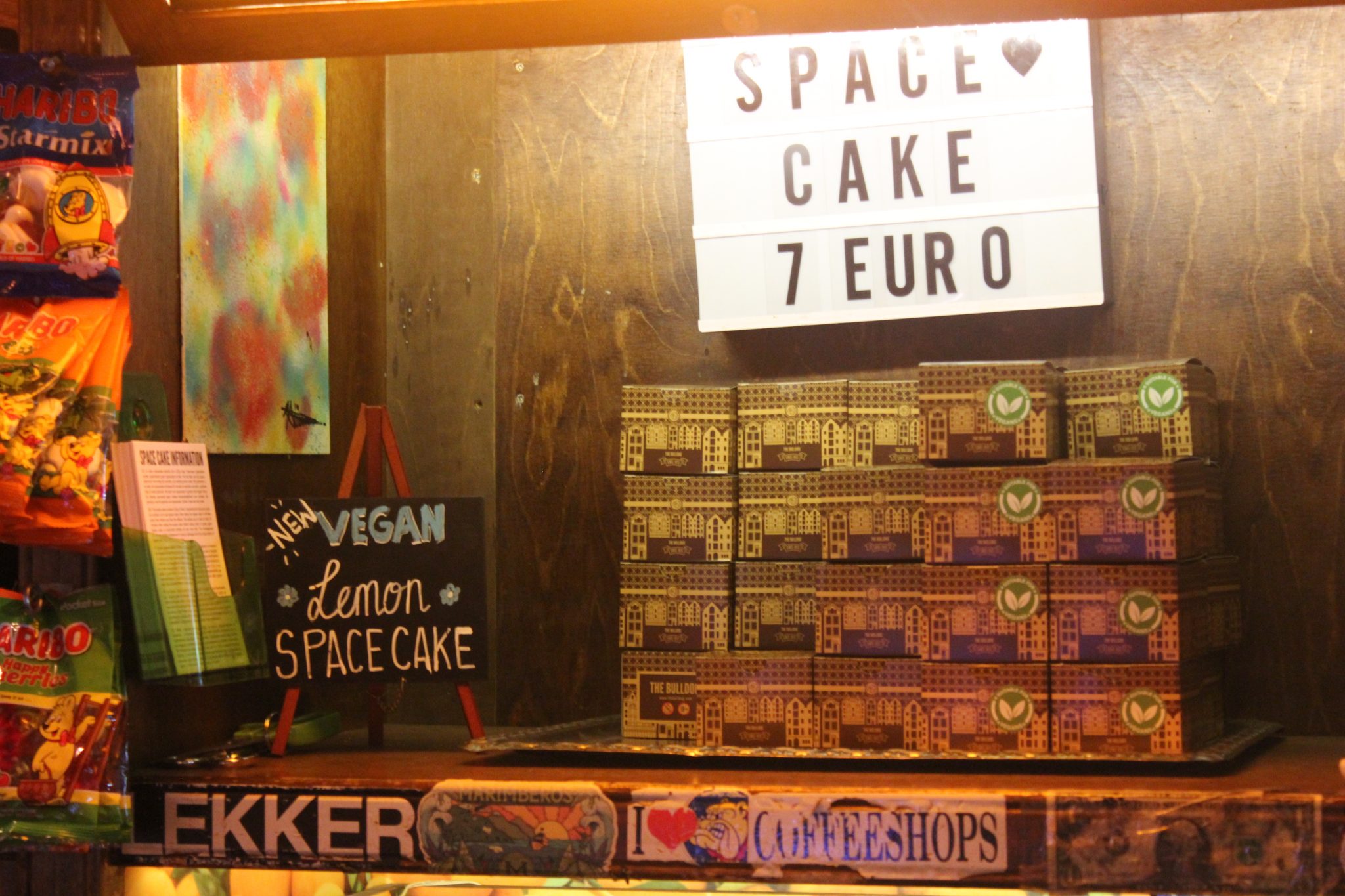 When we recently checked the offer of vegan pancakes in Amsterdam, we realised that a lot of traditional pancake places are now including a vegan option as well. And of course you can go to various vegan places or new (hip) pancake restaurants for vegan pancakes.

The quintessential Amsterdam streetfood: fries with mayo. Snackbar chains Maoz, Smullers and Manneken Pis already offer vegan mayo for a while. But with the availability of ‘Like! Mayo’ at the wholesale store nowadays any snackbar can easily expand their vegan options this way. Independent well-known snackbars like De Prins, Vleminckx, Bob’s Vlaamse Frituur and Pont Neuf in Amsterdam now also offer vegan mayo and we wouldn’t be surprised if more snackbars would follow!

From the start of Vegan Amsterdam one of the most asked questions is: where to get vegan spacecake. It’s settled now once and for all now that major tourist coffeeshop The Bulldog is offering vegan spacecake, alternatively head over to La Tertulia, Popeye or allegedly Katsu.

Some noteworthy vegan products which became available in 2019:

Whoa this year a lot of very diverse vegan places opened up in town! Check it:

– A second Vegabond location opened at De Clerqstraat, lots of takeaway food, vegan cheese and other products.
– Little Plant Pantry is a 100% vegan plastic-free bulkfood store at Oud-West, with a food counter as well.
– Mr. Plaenty specialises in vegan arepa’s, little cornflour buns with various fillings, a popular streetfood in Colombia and Venezuela. You can find him 5 days of the week at Albert Cuyp market.
– Goat Organic Apparal is a 100% vegan clothing brand, by the owners of vegan fashion store Geitenwollenwinkel. They opened a Goat Store at Haarlemmerdijk.
– Sunlight Lounge is a modest vegan cafe located at the entrance of Club Akhnaton in the city centre, offering vegan fastfood classics. Closed this season but they will reopen sometime next year.
– Plant Based Sushi ran a pop-up at Cafe De Ruimte all summer. A great succes, so they will continue in 2020, though at a different location.
– Vegan restaurant Mooshka moved to a new location at Van Woustraat this year, with a stylish interior and additional seating.
– Oliver Green opened in the east and offers 100% vegan healthy bowls, smoothies and such.
– After an earlier pop-up period at Amsterdam Zuid, Willem-Pie took over an existing bakery at Slotervaart, offering a large selection of vegan baked goods.
– Since many years we’re enjoying the various vegan donuts and pies from Nono Cakes, available in various stores and cafes. But now also available in their own store at Amsterdam Zuid-Oost, will be there probably until next summer!
– New vegan store Vegan Shop Shop opened recently at Haarlemmerdijk, offering various vegan dishes and products, like macarons!
– Getting international attention as Willicroft is the first vegan cheese store in the Netherlands, offering their own cheeses as well as some others.

Saying goodbye is a part of growing up

Unfortunately we also had to say goodbye to some of our favourite places! This year restaurant De Bolhoed, Dophert and The Dutch Weed Burger Joint closed, partially however because the owners starting working on other projects. Also Zest for Life, Vegabond Leliegracht and Vurger (aka Vegan Village) closed (Vurger will be back at a new location in 2020 though). We’ve also heard that Kebabi/Ping Pong Parck (owned by Vegan Junk Food Bar) has been sold, unsure if the new owner will also have a vegan menu.

Besides regular smaller forms of vegan outreach like Cube of Truth, we had three major animal rights events in Amsterdam in 2019. In May hundreds of international activists gathered at Dam Square for One Dam Day. Basically a huge Cube of Truth which lasted for 24 hours and managed to inform a whole lot of people about veganism. In June the second Amsterdam edition of the March Against All Slaugherhouses took place in the city centre. In August the second Amsterdam edition of The Offical Animal Rights March took place, where hundreds of vegans walked through the west and centre of Amsterdam to finish at Westerpark.

This year also the Vegan Student Association Amsterdam was founded. Still work in progress but they have a lot of future plans!

Vegan activist Earthling Ed started his recent European tour in the Netherlands in November and reached many people through a series of lectures at different locations in Amsterdam.

And this year we as Vegan Amsterdam organised several screenings of documentary The End of Meat at Het Ketelhuis, University of Amsterdam and the public library of Amsterdam. So many people wanted to see the film that every time tickets were gone in no time, we happily gave hundreds of people the chance to see this hopeful movie.

Next year a lot of major fastfood chains will be adding a vegan option to their menu. KFC already tested their vegan Chickenless Chicken Burger at a restaurant in Amsterdam, and will roll it out at every Dutch restaurant next year. Burger King launched a vegan burger in collaboration with Dutch brand De Vegetarische Slager. At the moment it’s already available in many European countries, the Netherlands will follow next year. And finally Mc Donald’s developed a vegan burger called Big Vegan. You can already try it in Germany, the Netherlands will follow somewhere next year probably.

And before you even will have burned off the oliebollen fat from your body there’s already a new vegan place opening. After a succesful pop-up during summer, Plant Based Sushi will have their own shared space at OKO Cultural Meeting Point. They will open on January 2nd.

Furthermore Vleesch Noch Visch was planning to open up a restaurant at Dapperplein, Amsterdam Oost in 2019. It didn’t happen yet, so let’s hope it will happen in 2020! And Vurger aka Vegan Village recently closed their restaurant at Jan van Galenstraat. But, they are planning to reopen at a different location in 2020. Sunlight Lounge will also reopen next year, more information will follow.