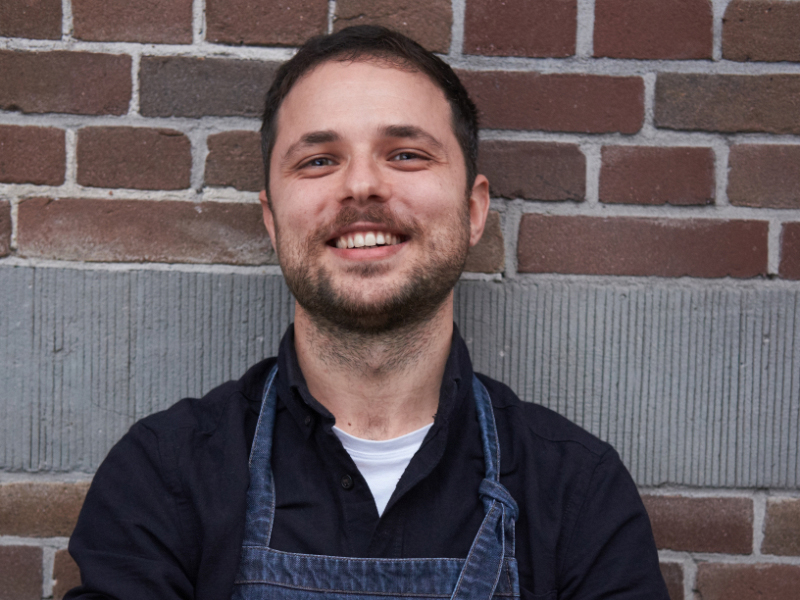 Alexander Gershberg is a vegan chef based in Amsterdam, born in Russia and raised in Israel. With his own company Vegan Sundays he organises pop-up events and cooking workshops, next to catering and private chef assignments. Although his feelings about Amsterdam changed, he still loves our city. “I definitely experience a growing interest in veganism here. Exciting times.”

How did you get into plant-based food?

I became a vegetarian because of ethical reasons eleven years ago. I continued to eat dairy products and eggs but then I heard it’s actually not necessarily very healthy. I had a skin sickness, and I healed my skin sickness with a well-balanced vegan diet. At that time I was a dancer and I felt much better already in my strength and flexibility, so I decided to go on with it.

How did you end up in Amsterdam?

I was living in Israel but wanted to do bachelors in contemporary dance in Amsterdam. I did audition and got accepted. I came here when I was 22. When I was a child, I travelled with my parents to Amsterdam and since then I had a dream to live here. At that time it was kind of an impossible dream but it turned into reality.

How did Vegan Sundays start?

It was with another dancer, a friend of mine, Evelyne. We were both interested in healthy cooking. We wanted to share our food and our meals with other people. We planned a meal that we would cook in her home for friends. But then there were 35 reservations, friends and non friends. So we asked the local restaurant around her house if we could do it there and they liked it. That’s how we started the pop-up events.

At a certain point she went back to dance, but then people started to ask me to do catering or to work as a private chef. It rolled and then I realised I have a bigger goal, which is to inspire the world to eat plant-based, by cooking it very tasty. So when people taste it they want to eat more of it. That’s how you get people more interested. 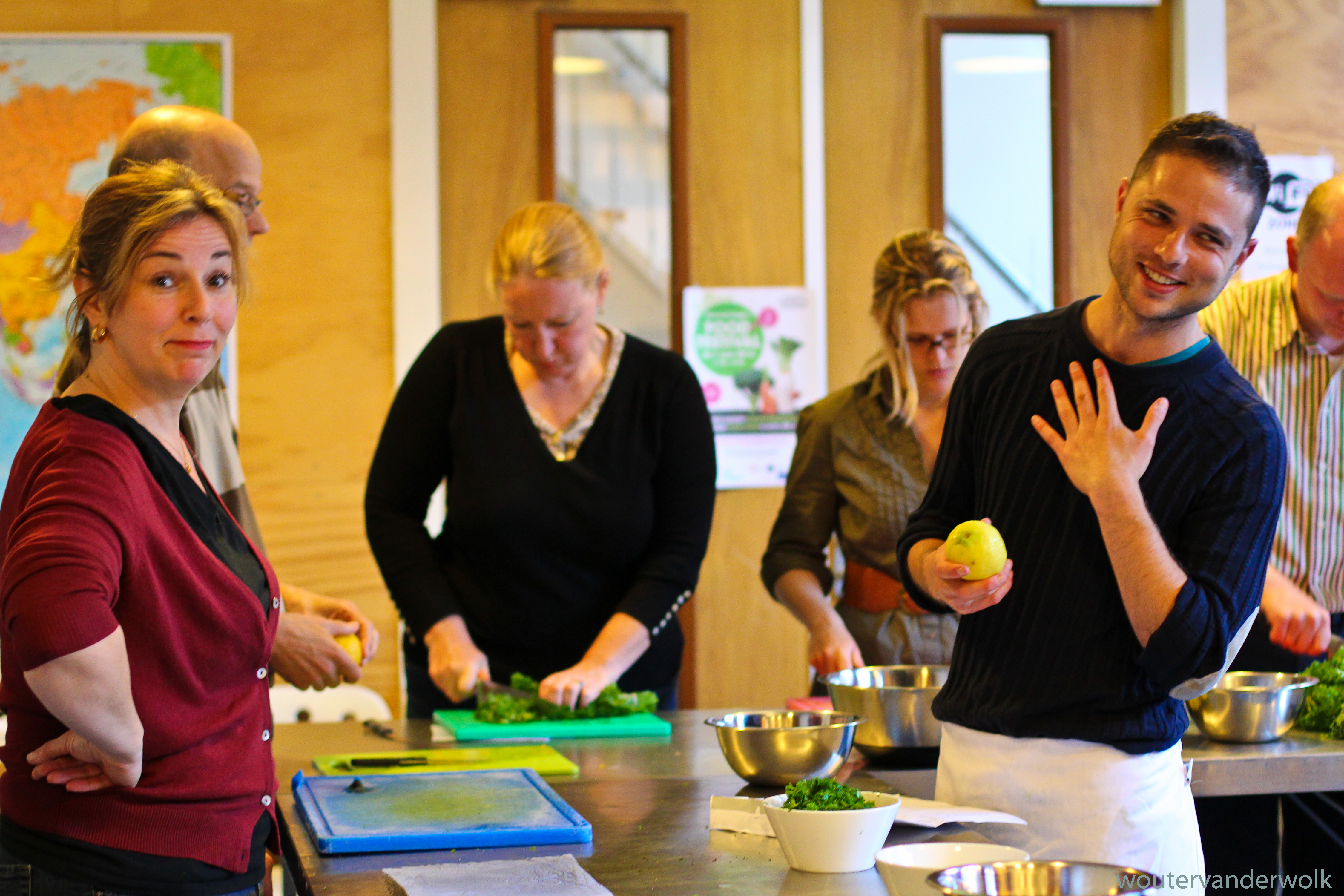 It has all the things that a big city can offer. High quality theatre and culture, clubs and schools. You can do and study everything you want. On the other hand it’s still very small and cozy, gezellig. You go over somewhere and you meet people, it’s like a village in a way and still has everything to offer of a big city.

Did your feeling about Amsterdam change?

Yes, when I came here as a young artist it was much more free and creative and there were more foreigners and artists. But a new rightwing government made cuts in the art budget from 2013 on and local artists left. I felt the city became more rightwing oriented, more bourgeois, burgerlijk. It’s more money oriented now and less creative.

On the other hand there is a lot happening in the natural food movement, many organic shops are opening and there is more interest in plant-based diets. Somehow the energy that was buzzing around the arts and creativity in the city disappeared into buzzing around health and culinary things. So it’s still interesting but in another way. Less creative but more in a sense of sustainability.

What does food mean to you?

Many things. It’s our connection to nature. When plants are growing, they gather natural elements from the environment, like sunshine, water, minerals and oxygen. Food is a way to get nature into our bodies. What we eat has a direct influence on our health, our body and our mind. It’s the most direct and practical way to influence our life and the lives of the people around us on a small scale and on a big scale.

You see, food has many levels of consciousness. The sensual level like tasting and enjoying food. The emotional level, like food that you crave for or how you express your love through cooking. The social level in bringing people together. And the political and philosophical levels. The food choices we make every day will influence all these levels of our life. 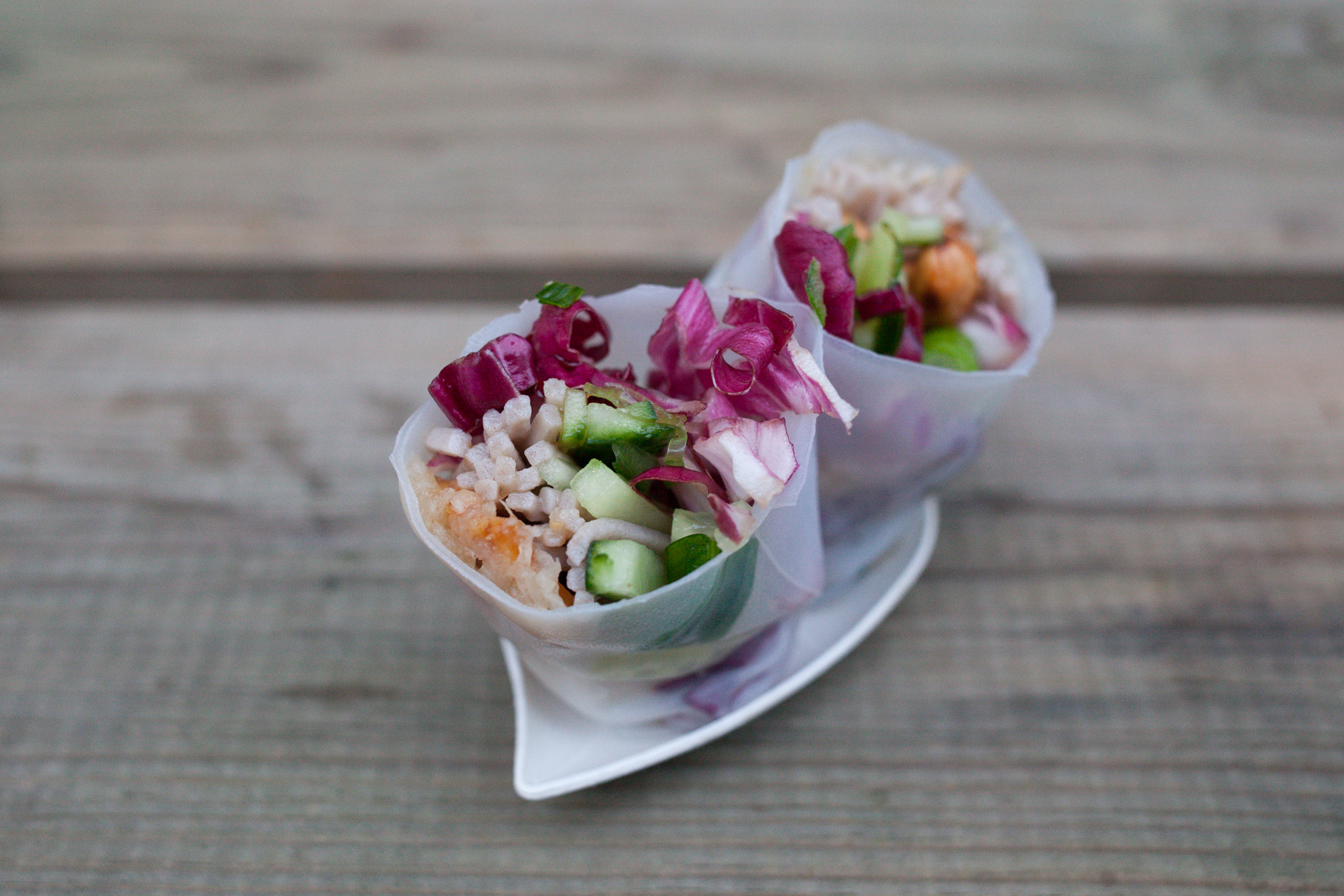 Does your background as a dancer influence your view on food or preparing food?

My approach to things didn’t change much when making the transition to cooking. Whatever principles I was practicing in dance I kept on practicing in cooking. Both are very physical and creative. It’s about communicating to people, satisfying people but also challenging them and teaching them something new. It has a lot to do with energy, what kind of energy you deliver and how people receive it. When cooking I work a lot with energy, how does it manifest itself into the food and the body afterwards.

In the pop-up events I like to combine art with the culinary. I got inspired by the beginning of artistic ballet in the court of Louis XIV. In between the dishes served there were dancers and musicians. Today we call an entrée a dish as part of a meal but it comes from these times, meaning the entrance of the dancing.

Which elements do you take from all the different cuisines you’re influenced by and what can we learn from them?

When I did research about plant-based diets I was looking at the cultures that I come from, what was traditional, what would people eat? I realised that until 100 or even 65 years ago there was not so much meat or animal food. It was more in small amounts, people could afford it only once in a while. If you look at all cultures, it’s all traditionally based on whole grains, beans and vegetables. Which is the basis of a healthy vegan diet. I looked for traditional plant-based dishes from the cultures I come from, and I realised there are plenty. Every culture has these. These are the elements that I’m taking.

Eventually when I teach traditional dishes, people love them the most. Like Japanese miso soup, Russian buckwheat, Middle-Eastern fried eggplant with tahini. Of course as a chef I make my own twist on it. I never use any kind of weird modern inventions like processed meat replacements and vegan cheese or whatever. My cuisine is about traditional ingredients and preparations but in a contemporary context. And people always find it tasty. Not because I invented it, but because it’s time-proven. It’s recipes that go from generation to generation, improved by so many chefs. It’s an honour to eat this food. It connects you to history, it’s fun!

Based upon your experiences with giving workshops, what’s the one thing people don’t know in relation to vegan food?

How to eat a diet which is strengthening and nourishing enough. Most vegans are missing a lot of nutrients which you can easily get from plant-based diets, due to a lack of knowledge and eating too many weird animal food replacements.

All healthy plant-based diets were traditionally based on combinations of whole grains, beans and vegetables. In Japan you have rice and soy beans, in Mexico corn and kidney beans, in Russia buckwheat and white beans, in the Middle-East bulgur and chickpeas and in the Netherlands you have barley and peas. Combined with vegetables this has to be every day the basis of the nutrition. It’s also the cheapest food, everybody can eat like this and it’s so nice. Of course you can always make a smashing dish with fancy ingredients but the basis is very cheap. 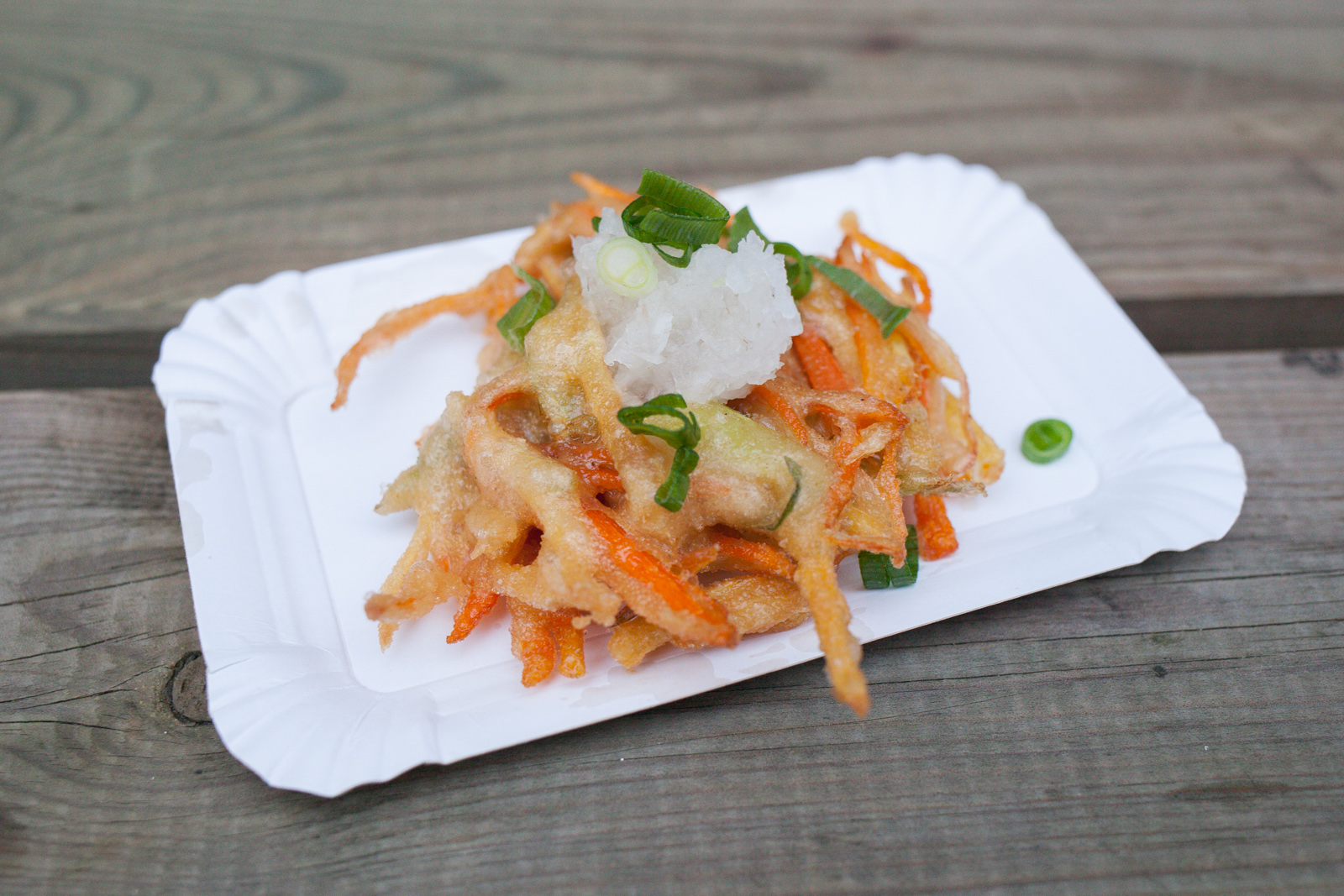 Do you experience a bigger interest in veganism in Amsterdam?

Yeah definitely there is a growing interest. Exciting times. Although people don’t always talk about veganism but more about plant-based diets or to eat more healthy, from which it follows to eat more plant-based. Most of my clients are not vegan, but they are very interested in this. Many people are trying to eat more healthy but not all of them know how to do that so that it’s practical and sustainable. You can make one green smoothie but you cannot survive on just that, you need to learn.

Do you have a favourite restaurant in Amsterdam?

In Noorderlicht they served a very nice vegan dish when we asked for vegan options, although it was not on the menu. Who really knows how to cook well is the guy from Mana Mana, a Israel style restaurant in De Pijp. The menu is almost all vegan, and he really understands good taste and good eating.

Then there is a place called Dappertutto, in the Dapperbuurt. It’s an Italian restaurant, not vegan but they have lots of wonderful plant-based dishes and can make a vegan meal.  Also Pllek is a wonderful place. I know the chef Dimitri and he’s using wonderful, good quality vegetables and is very open to vegan cuisine.It’s really coming up in more places.

Where do you like to go to do groceries?

I like to go to the Noordermarkt on Saturday. That’s the most inspiring nice place to buy fresh ingredients of the best quality. 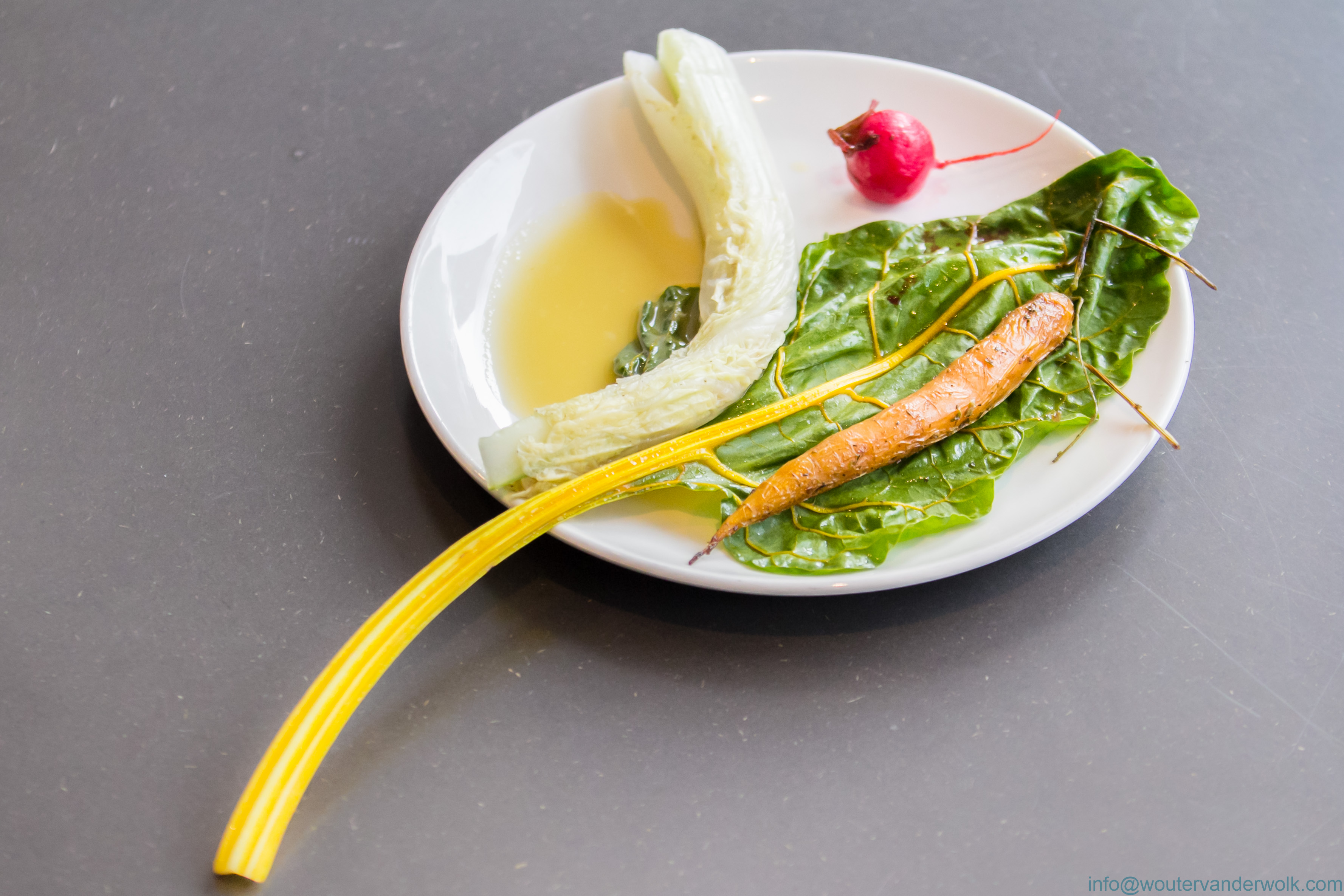 Do you have a favourite vegetable or ingredient?

Every season it’s something else. This year I am crazy about the Crown Prince, that’s a grey green pumpkin. They are the most tasty. Here in the Netherlands they grow very well. Farmers in the Netherlands can be very good actually, but there could be more talented cooks. You have to know what to do with all these vegetables. I think it will be very nice here in five or ten years, because there is a lot of interest now and all these top cooks will do much more with vegetables, more plant-based. It’s already happening, but even more.

What are your goals and plans for the future?

And also I want to give more cooking workshops. I think teaching is my thing. It is very satisfying to give knowledge to people who want to receive it. They can do something with it, it can make an impact in their life. It’s wonderful if I hear from people they continue to make my recipes, and they like it, it’s the best thing that can happen to me.

On the 5th and 6th of December Alexander will host his Sinterklaas pop-up, themed Back to Black. It will take place in the Conscious Hotel at the Overtoom.
To make a reservation visit his page.