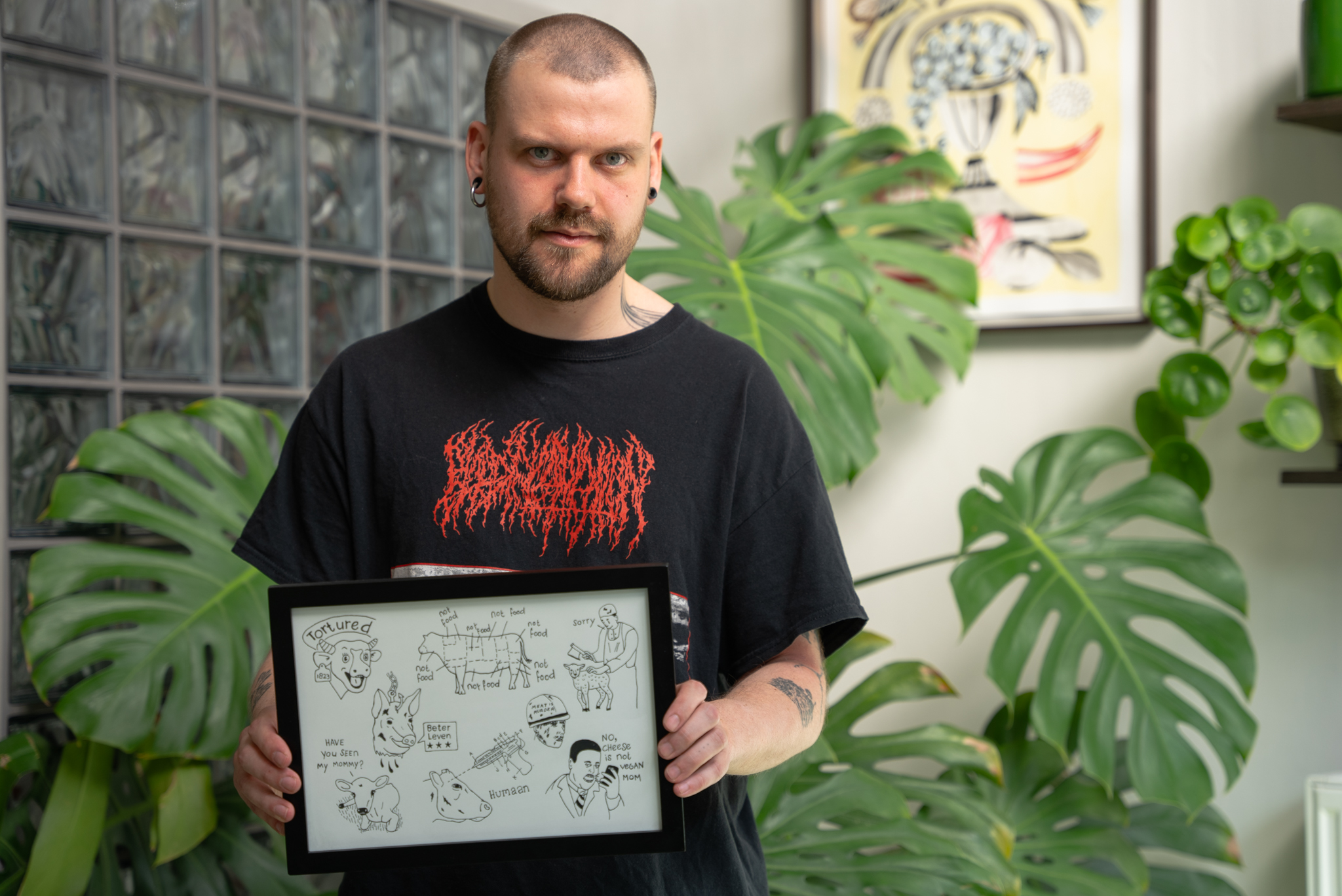 “For a long time I thought I wasn’t good at drawing at all. And a lot of drawings from the early days I couldn’t really tattoo in the beginning. I liked the drawings but wasn’t really paying attention to how I could make it into a good tattoo. I didn’t start off with becoming a tattoo artist as the goal, so it still amazes me sometimes that it happened like that.”

“I don’t really know how to describe my style, it’s just simple, more ignorant style. Which is about the way of drawing, that the proportions are a bit off, no shade, no realistic aspects and those sort of things. I am inspired a lot by medieval pictures because they are very symbolic, but also drawn in a bit ugly way. That’s what I find cool, that the drawings are not perfect, but that they do carry a message.”

In the first few years he did various vegan-themed tattoos, although at the moment he prefers other topics in order not to repeat himself. “What I wanted to achieve with the vegan-themed illustrations was to get people thinking. Just the slogan ‘go vegan’ is simple and might be effective. But I think it’s nice to go beyond that, because maybe it doesn’t ring a bell for most people. So if you have a humouristic drawing, like the pig’s head I drew saying ‘Beter Leven’, people might think that’s pretty weird indeed, an animal getting slaughtered accompagnied by these words.”

“On the other hand a tattoo can be a kind of conversation starter. Like the tattoo from Moby, who has the words ‘animal rights’ in big letters on his arms. I tattooed ‘Don’t eat animals’ on the front of someone’s body. I thought it was very cool that someone wanted this on such a central spot, it really draws attention. In that sense tattoos are a really nice medium.” 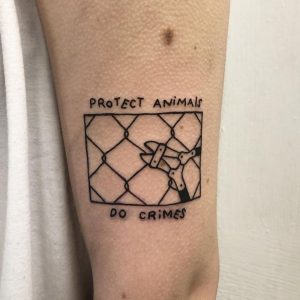 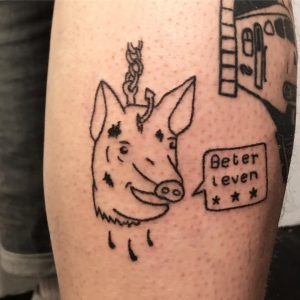 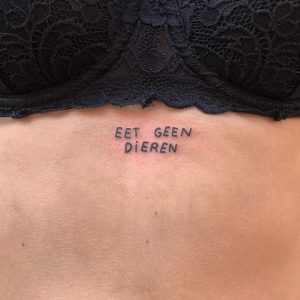 “I was raised in a vegetarian household, but my parents didn’t force it on me. But when I was 12 I decided to no longer eat meat outside of the house as well. Still it took quite a while for me to go vegan. I thought as a vegetarian I was already doing the right thing, yet still there is a difference. If you are vegetarian because you want to avoid animal cruelty, it is weird to say killing animals is bad, but it doesn’t matter that they had a shitty life.”

“In my teenage years I started listening to punk music. Some of the lyrics were about veganism, even though at the age of 15 you don’t fully understand what the music you are listening to is about. At punkshows the food was usually vegan so it was easy to find something to eat, as opposed to most other places. When I was 19 I went to Ieperfest in Belgium [a big hardcore punk festival] where all food is vegan. It was nice to experience, like OK this is also how it can be done. So in general in that way you come more in contact with it and increasingly start to think about it, and believe it is possible.”

“Later I started to use less and less dairy products. In the beginning I succesfully stopped eating cheese. Which was quite a step for me as I used to eat cheese every day. Also I was a big sneaker collector, but then I was like why would you continue buying shoes with leather, if this issue is important to you? So there wasn’t one single moment when I dediced to go vegan. But it just became easier for me, also due to the many available vegan products these days. Nowadays I don’t conceive it as being hard or whatever for me to be vegan.” 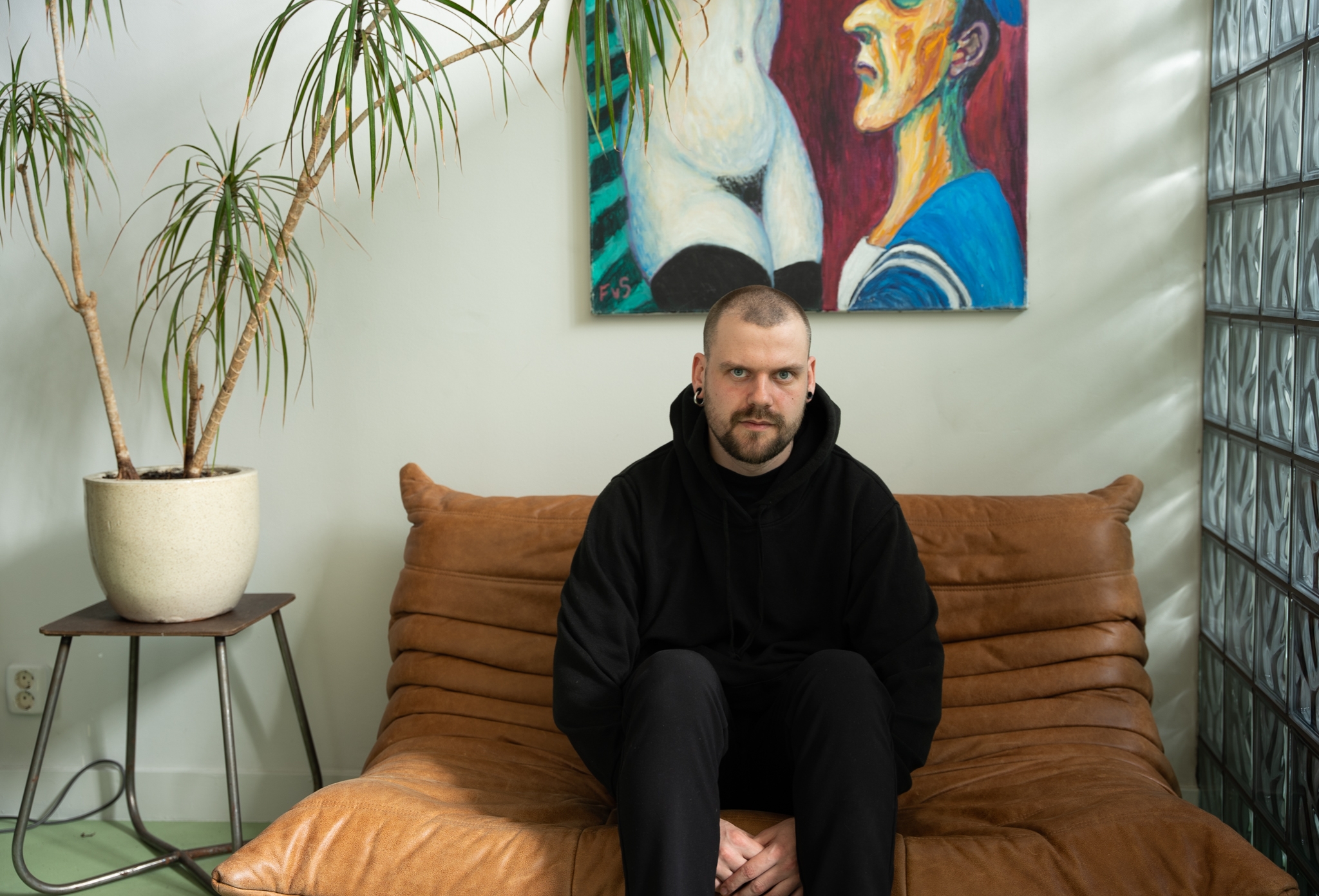 Being a tattoo artist and being able to travel to different countries to do guest spots, also allowed him to try vegan food elsewhere. His first trip was to Bristol, when he was still pretty new to veganism. Seeing the amount of vegan restaurants they had over there for breakfast, lunch or dinner was an eye-opener and felt really encouraging.

“I wouldn’t go so fast to for example Stockholm just to experience their vegan food scene. But if I am already there I have a good reason. It’s a nice side effect of this job that you get to visit other places in that way.”

“During corona I just drew alot, and tried out bigger projects. Like backpieces or pieces for the front, which normally take a long time to draw, since I do everything with pen and paper. But now I had the time to spend four days working on a bigger project like that, and even if no one would choose it, I still had a good time drawing.”

“I feel like futurewise it still can go bigger and crazier. I am lucky that recently more people want bigger works, which is a new challenge for me. Besides that I would like to tattoo in many other countries, and that way visit places I haven’t been to before.”

Mattijs works at tattooshop Mosel & Mosel, Spaarndammerbuurt. To see more of his work, check out his Instagram page. Flash only.

Not all tattoo ink is vegan, as sometimes bone char is used for colour, or gelatin as a binder. Some brands are labeled as vegan, others can also be accidentally vegan. You can always ask your tattoo artist what ink they use. Besides the ink also the stencil paper and after care products can be not vegan. 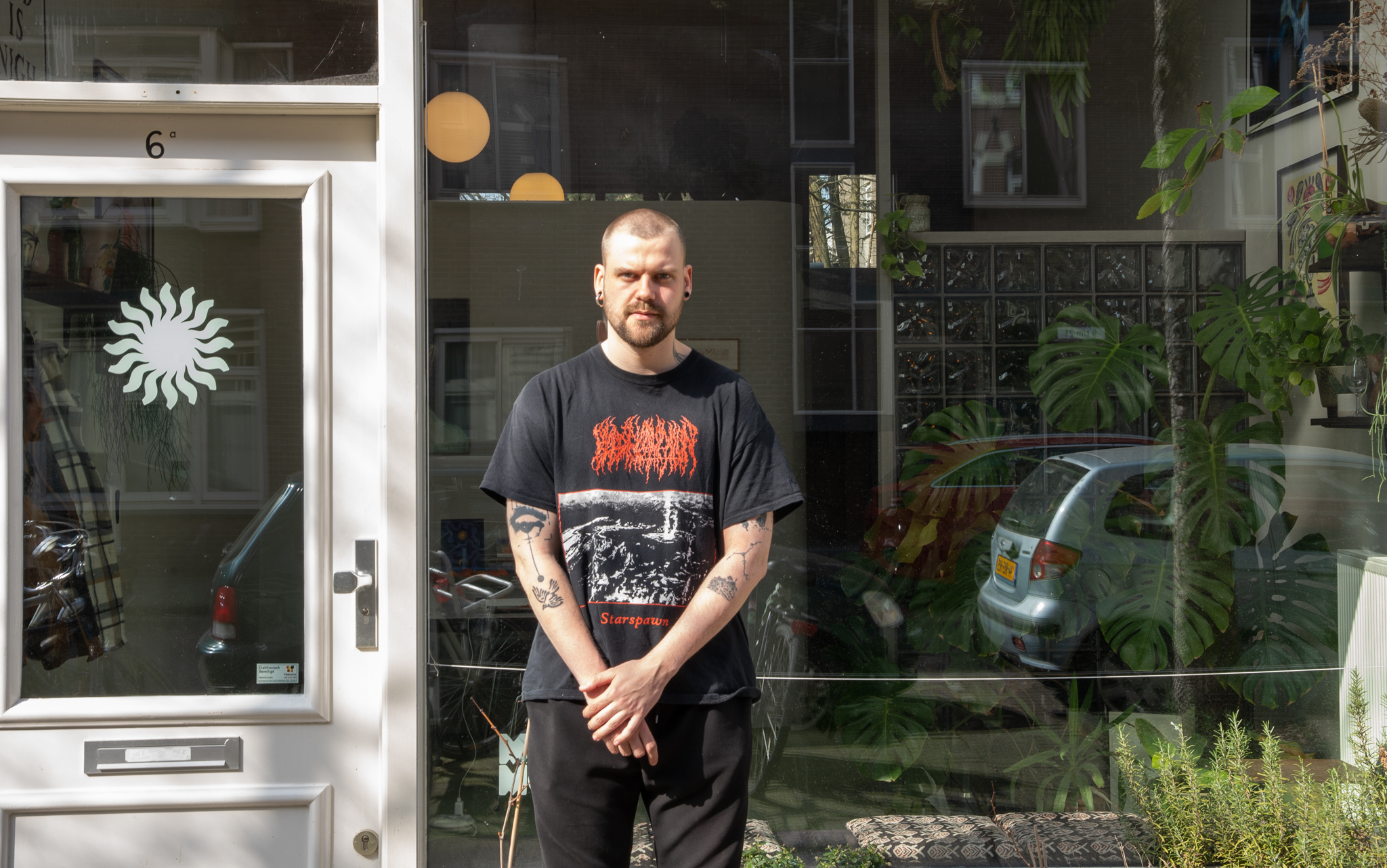 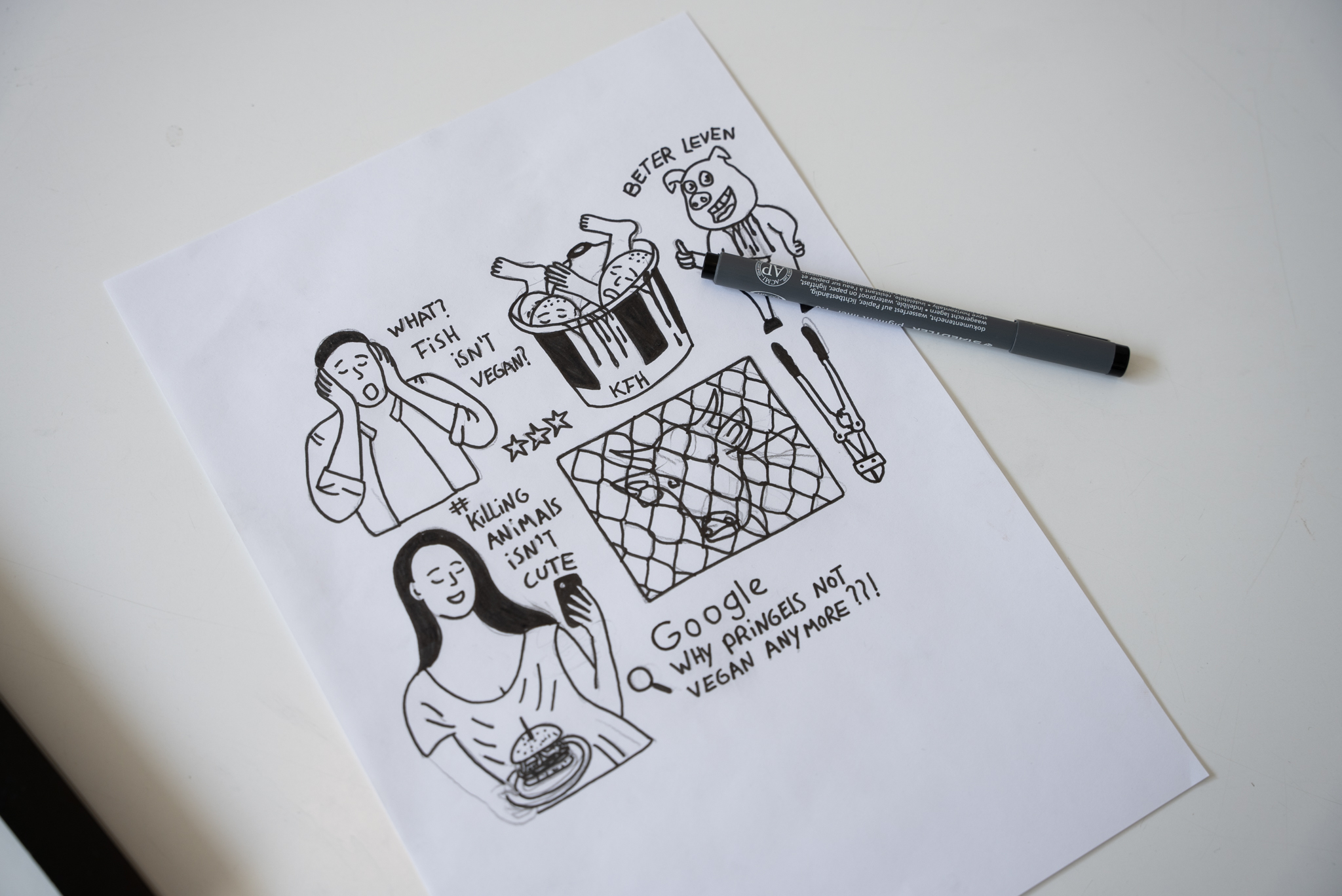 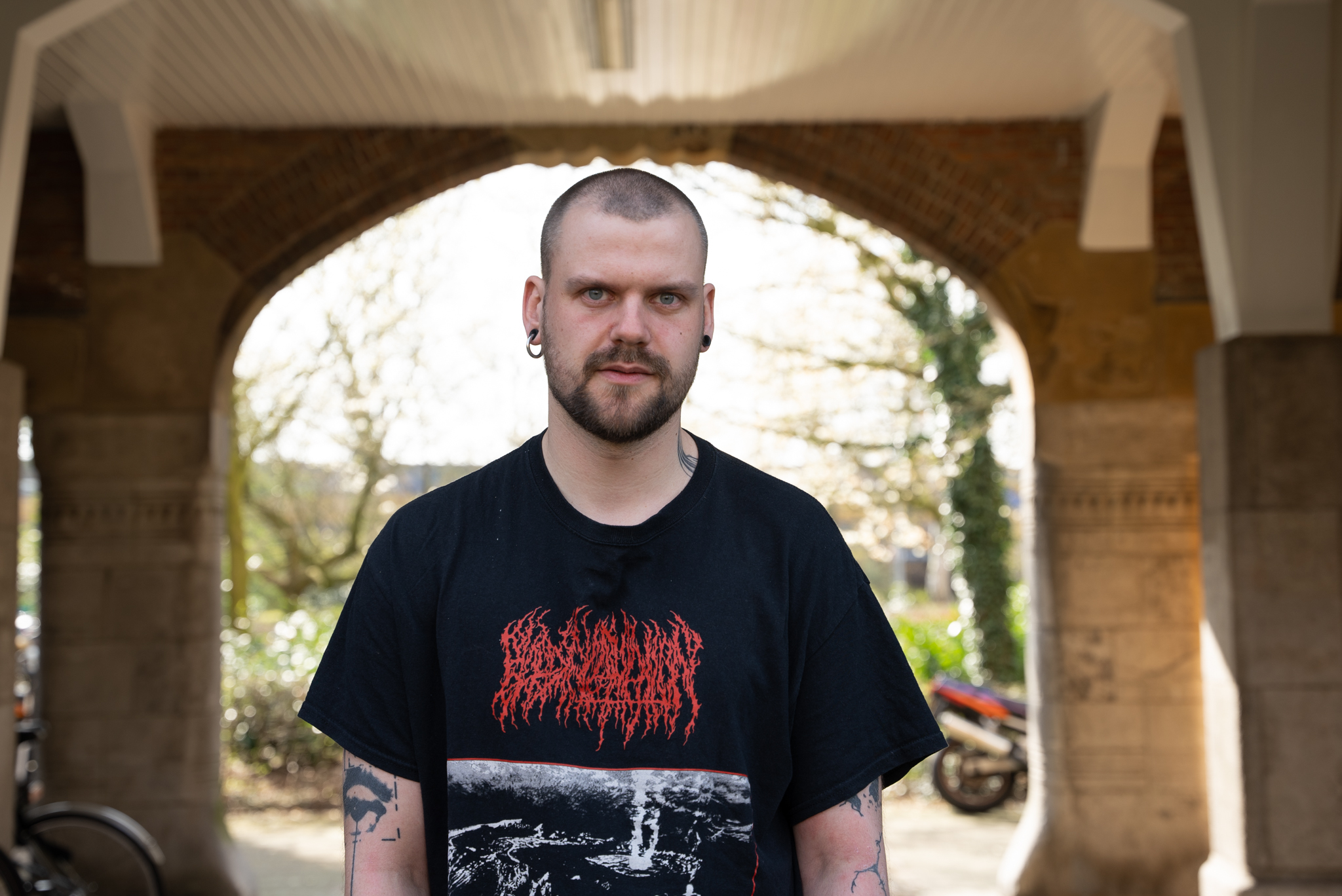