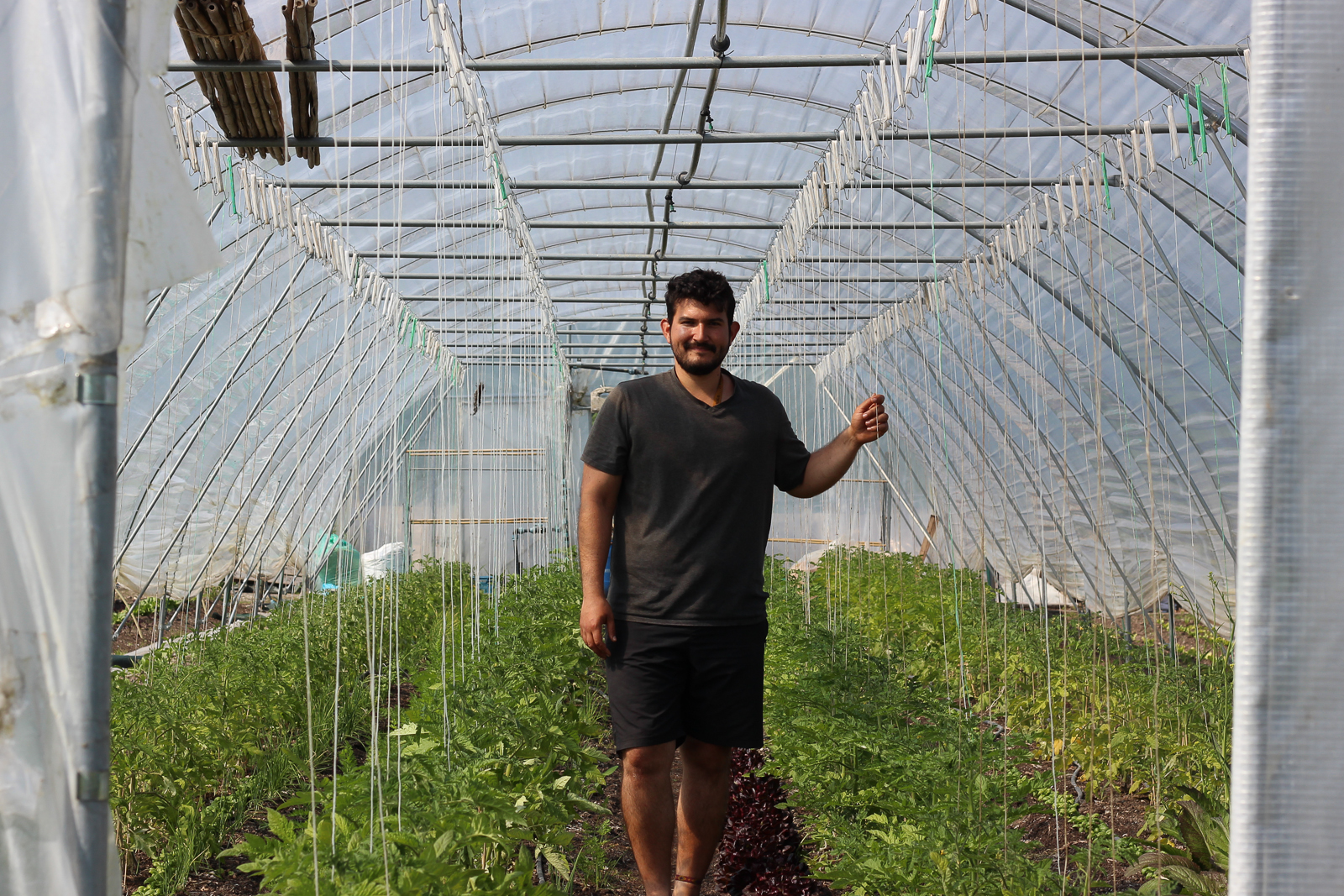 They met eight years ago while studying at the renowned University of Gastronomic Sciences in Italy, also known as the university of the Slow Food movement. Now, Andres Jara and four others are running the Stadsgroenteboer farm in Osdorp. On 0,4 hectares at the western outskirts of Amsterdam, they are growing no less than 60 different kinds of vegetables, plus 15 different herbs.

I cycle there to meet Andres, who besides being a vegetable farmer, is also a chef and is selling plant based food products under the name of Roots, Rice & Beans. I find him working behind his laptop, underneath a makeshift canvas roof, his office for the day. While he shows me the property, he tells me all about De Stadsgroenteboer and his other projects. 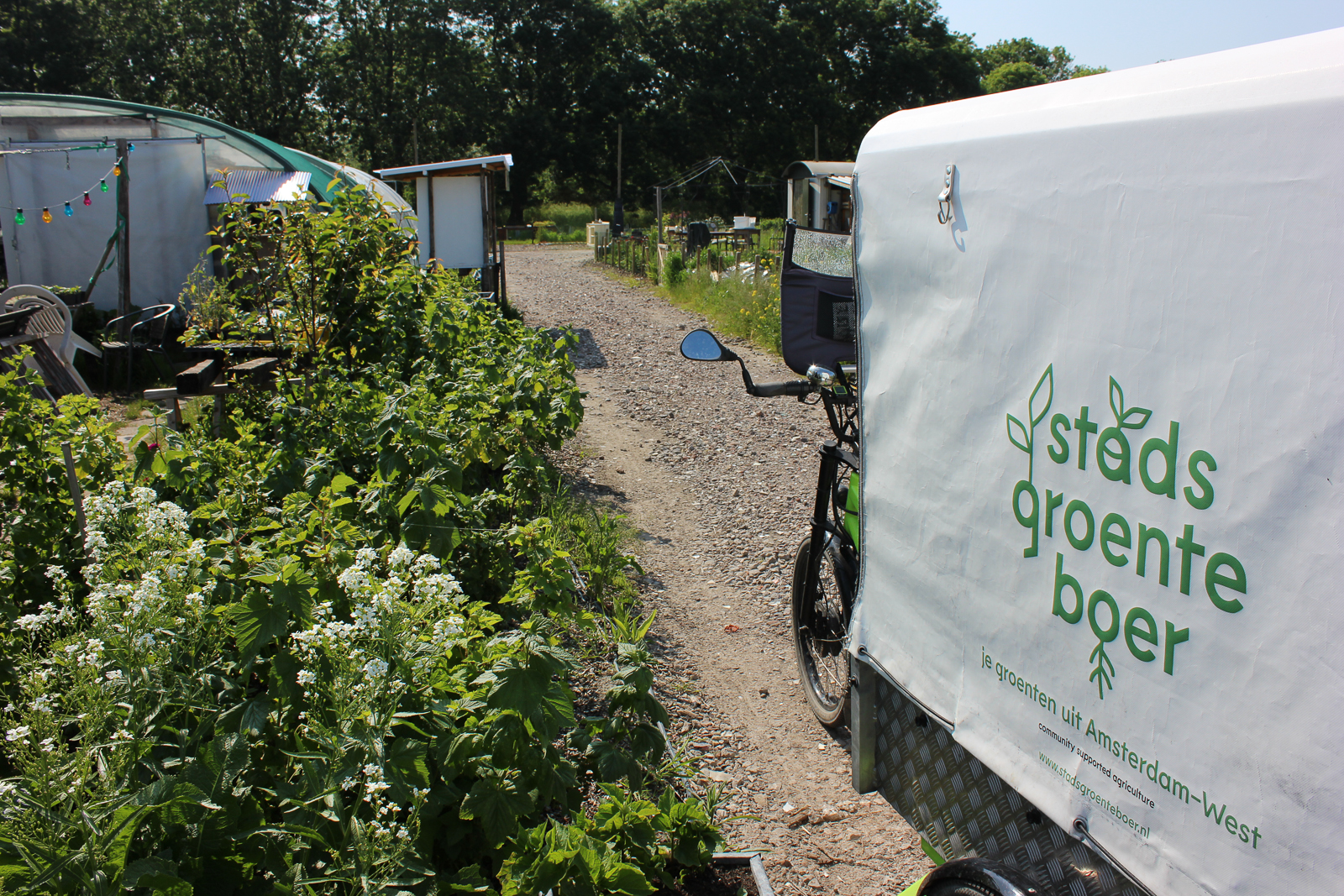 De Stadsgroenteboer is mainly a CSA project (‘community supported agriculture’) – meaning that you subscribe to them and in return receive a box of vegetables on a weekly basis for 30 weeks a year. The way they grow their crops is different from the way conventional agriculture is working. Instead of growing one type of vegetable, they grow different crops together. That way they strengthen each other while minimizing risks in case something goes wrong. After a crop is harvested, they can immediately plant another one, so that the soil is always working. And by leaving the top layer of soil as intact as possible, carbon dioxide remains in the ground and doesn’t get released back into the atmosphere. Andres recommends me to watch documentary Kiss the Ground (on Netflix) which deals exactly with these topics.

We move from greenhouse to seedbed to another greenhouse, and then reach another corner of the property. This one is reserved for inter growing three different crops, according to a technique called the Three Sisters. Andres: “This is the most ancient way of growing vegetables in Central America. It’s a technique that Aztecs where doing when they were feeding their civilisation. So it’s corn, squash and beans.”

Andres explains it to me. When the corn grows, it gives structure for the beans to climb. The beans give nitrogen to the corn. The pumpkin creates a nice environment for the others: no weeds and it keeps the soil moist. The vegetables together provide also a complete diet: carbohydrates, protein and minerals. What a beautiful synergy! 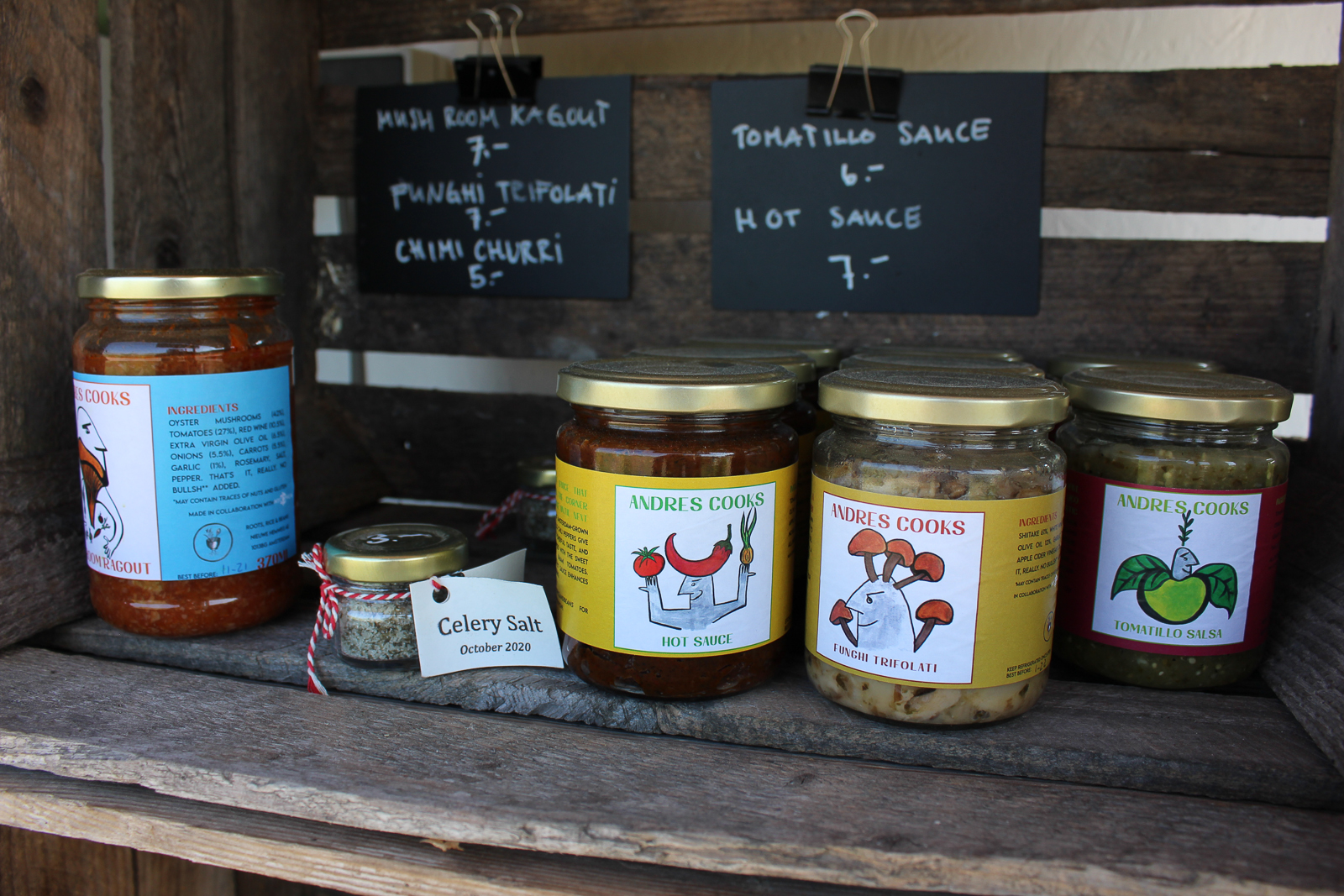 Everything was going well for De Stadsgroenteboer until corona happened. Then all of a sudden they lost opportunities to sell, something that also befriended farmers were suffering from. In an effort to deal with the situation Andres decided to start a new initiative: to buy all the produce that the farmers couldn’t sell and to make nice vegan food products from it, selling it under the label of Andres Cooks / Roots, Rice & Beans to local shops around the city.

Any organic waste at the shared kitchen he is using is taken by him back to the farm to become compost, and so, the cycle is complete. “We are coming with a proposal for a circular solution. It’s a hell of a job, but we’re living the dream. We are growing our own vegetables, we are eating best quality, local, organic. Bringing back to the soil, reducing CO2 emissions, helping the community and helping the environment. What more do you want?”

But Andres is far from new to cooking. He grew up close to Cartagena, Colombia and thanks to his family developed a love for food and an understanding of the importance of it. He did culinary school in Peru and worked in restaurants in various countries in Latin America and Europe. When he did his culinary studies he was mostly focusing on how to transform a product in something delicious. Later on, he realises it’s about so much more than just that.

“I had one French chef that I really learned a lot from. He taught me, it’s not just about transforming food. Ask yourself where is your food grown? How is it grown? Why is this food grown here, why is it prepared in this specific way in this part of the world? This increased my curiosity of cooking, of different cultures.”

How he got into farming eventually? “I’m a cook. But my love for food goes beyond. Then I was like OK, what is the best thing to do food-related? Knowing where your food is coming from, knowing how to grow your own food.”

In much of his cooking he connects the dots between cooking and farming, and between the countries he lived in and his current whereabouts. “I cook very much international flavours with local ingredients. If you have some knowledge of what you can do with a vegetable, the possibilities are endless.” One of his products for Roots, Rice & Beans is a hot sauce according to his grandmother’s recipe back in Colombia, but made with local ingredients. She’s very proud of it. Another one is his ‘Favamole’, a ‘guacamole’ but made without avocados, using instead broad beans he grows himself.

“Avocados have  a lot of environmental, social and political issues. But we are noticing that everyone loves guacamole, we don’t want to change that. If you care about sustainability and the impact of where your food is coming from we are giving a proposal to you to make a change. So it’s done with local fava beans. It’s something from my area of the world, brought here made with local products.”

The way he farms with De Stadsgroenteboer, his cooking for Roots, Rice & Beans, the compost project, it all has one thing in common. It might not be the solution for all problems, but it makes us think about alternative ways of arranging our food system. “We’re showing other possibilities. Not even solutions, because it is very complicated. We’re bringing proposals, and if someone wants to follow, great.”

The CSA from Stadsgroenteboer is completely full for this season, but you can get their veggies also at the market stall at their property, open every day. The products from Roots, Rice & Beans are being sold in various shops in town, check here for an overview. 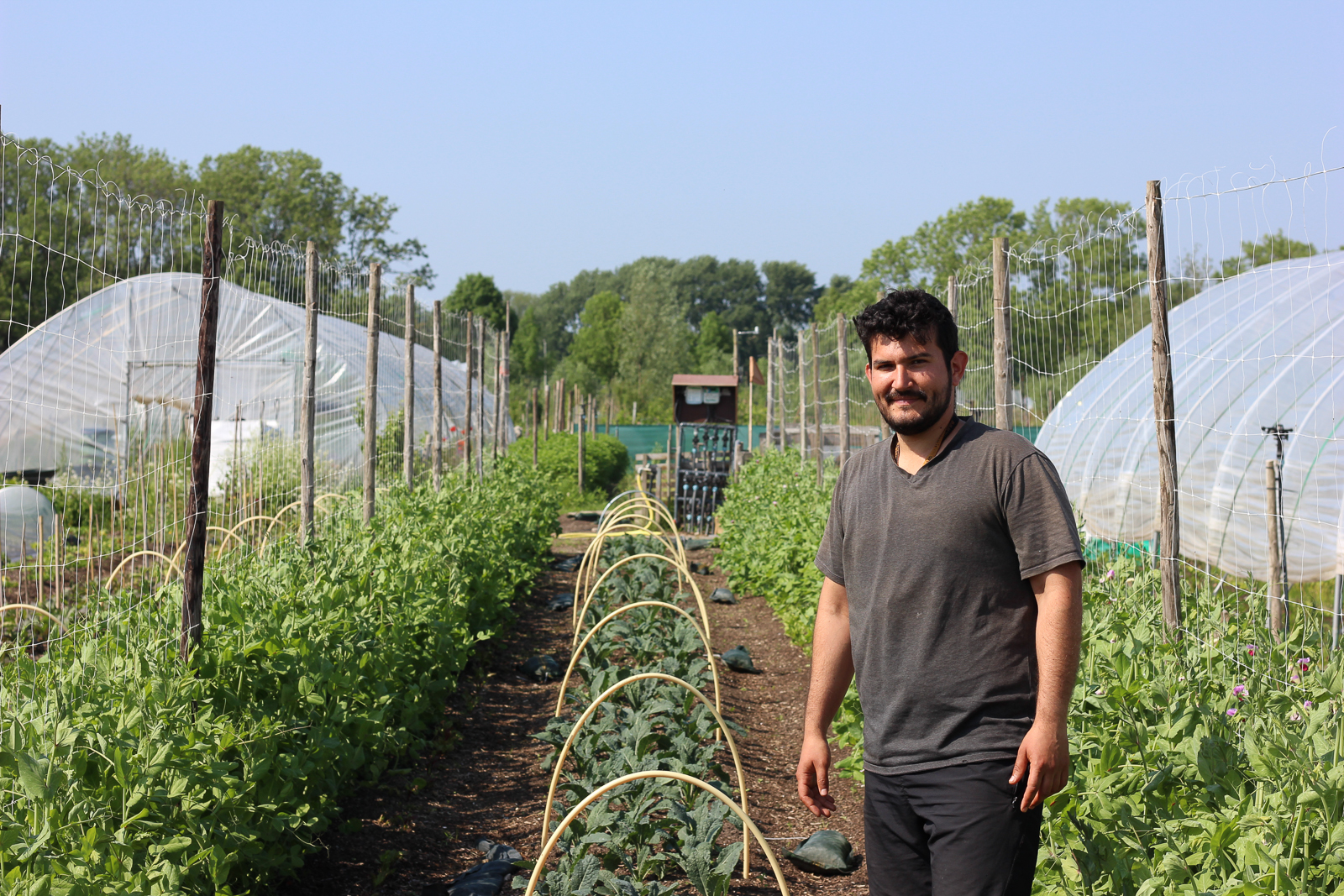 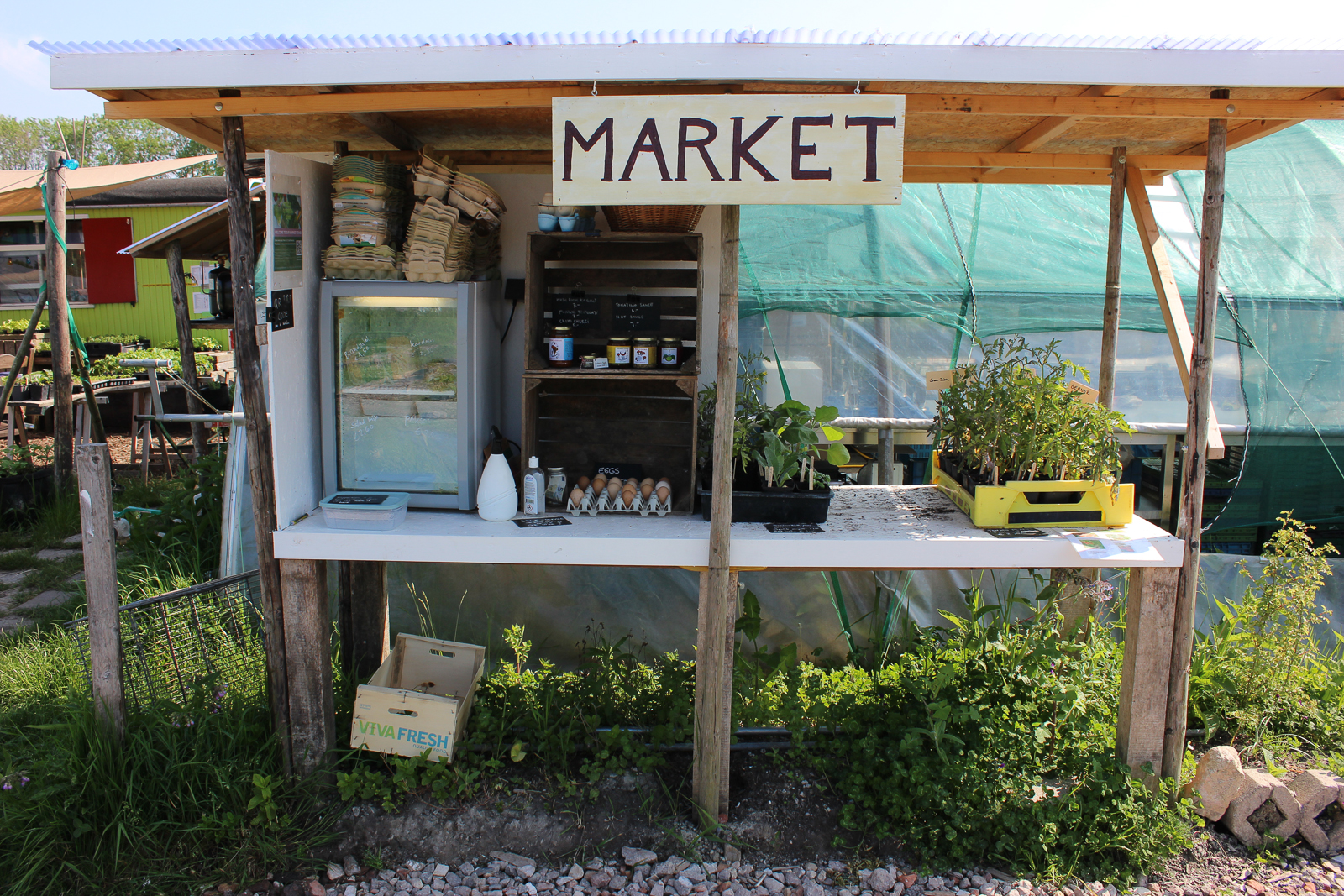 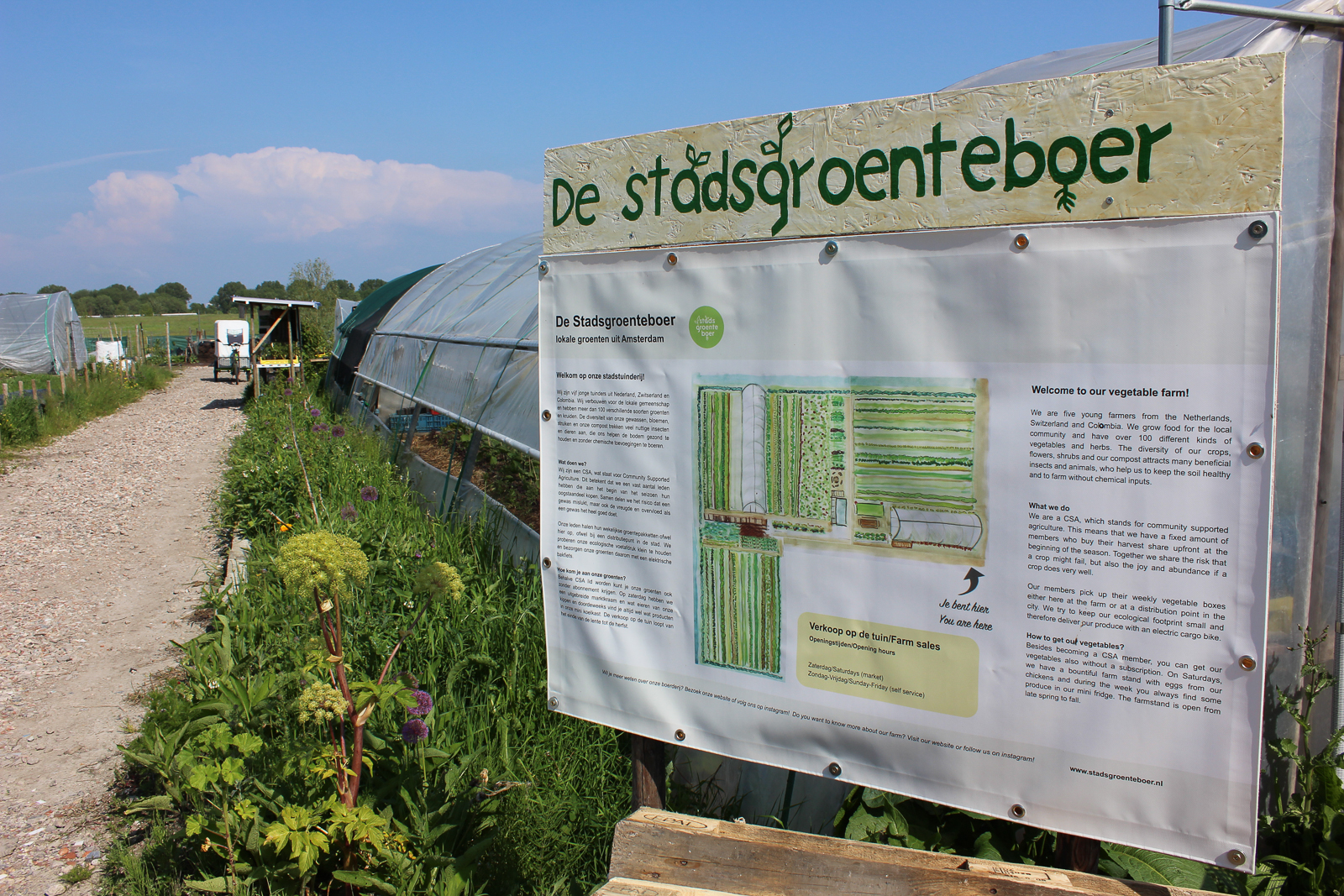