You’ll quickly find out that at least in the city centre, there are almost no other supermarkets besides Albert Heijn. Much to the annoyance of many locals. Apart from the supermarkets, there are also some toko’s (Dutch word, originally Malay, for non-European food stores) here and there, and some stores aimed only at tourists, often also aptly named ‘supermarket’. If you are looking for a big supermarket, the Albert Heijn close to the Dam square would be the obvious one.

For processed food, Dutch supermarkets typically tend to be decent, but not amazing for vegans. There is no specific vegan section and hardly any vegan labeling. Here is some help:

Almost all supermarkets will sell tofu. Some of them also sell tempeh, an Indonesion product also made from soybeans. Many stores will have additional meat substitutes but most of them usually are vegetarian, not vegan (often containing chicken egg protein). 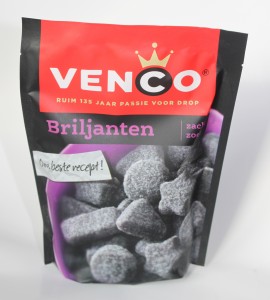 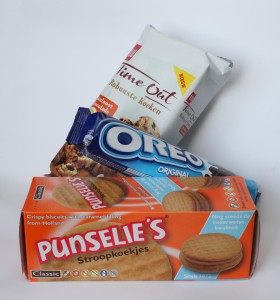 There’s not a crazy variety of vegan cookies available in the supermarket, but some of the ones that are, are really good! Our favourites include LU’s Time Out Robuuste Koeken, Punselie’s Stroopkoekjes and of course Oreo’s (only recently the American vegan Oreo’s became available in the Netherlands). Nowadays one can find a greater diversity of chocolate in Dutch supermarkets. Dark chocolate is usually vegan. Keep an eye out for the dark chocolate of Tony Chocolony, a brand which strives to use slave-free cocoa. Most of the regular candy contains gelatin, hence is not vegan. A brand called Goody Good stuff is available in most supermarkets and is all vegan. Some supermarkets sell Venco Briljanten. This is a vegan type of liquorice, without gelatin or beeswax. More vegan liquorice can be found in organic stores in town.

What are some ingredients to watch out for?

The Vegan Wiki website has a list of e numbers which are definitely or possibly not vegan.