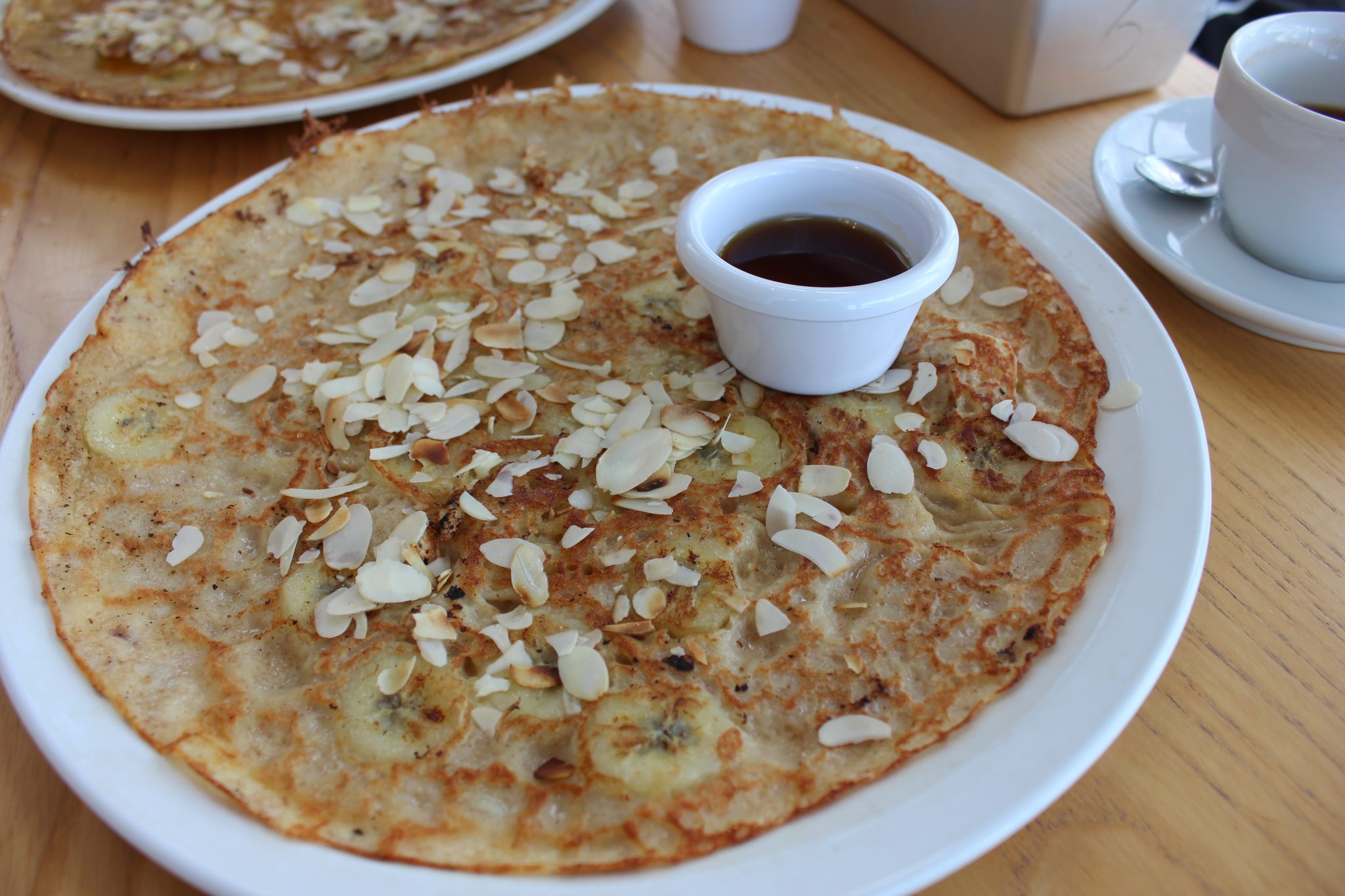 Finding vegan pancakes on a restaurant menu in Amsterdam used to be rare, but nowadays there are PLENTY options! A few hip pancake places opened up which of course have vegan options (can’t open a new hip place without it) but also traditional Amsterdam pancake places all of a sudden realised you CAN make a pancake batter without using milk and eggs.

So broadly speaking you can choose from vegan and vegan friendly-places, new hip pancakes places, or traditional pancake places. And then there are some others. Most places offer either American (thick and fluffy) or Dutch style (larger and thinner) pancakes. We found 13 places with vegan pancakes on the menu, check ’em out!

All vegan restaurant specialising in burgers and milkshakes. Extravagant pancakes on the lunch menu, stack of American style ones, crazy toppings. Located in De Pijp, almost next to a metrostop (Noord-Zuid lijn).

The most prominent pancake restaurant in Amsterdam, aimed at tourists. They offer different pancake styles, for the Dutch style they have vegan options. Sweet and savoury. They have six restaurants in Amsterdam, most in the centre. One of them is located right next to the ferry’s to Amsterdam Noord, pretty nice view over the water!

Their concept is pancakes and bubble tea, hip spot located just off Ferdinand Bolstraat in De Pijp. Very vegan-friendly as most of their pancakes are vegan. Thick American style pancakes with over the top plating.

All vegan lunchroom specialised in patisserie! Most beautiful pies and cakes of Amsterdam you’ll find here. On their menu banana pancakes and matcha pancakes. Located just south of Westerpark at Haarlemmerweg.

Oldest pancake restaurant of Amsterdam (1973) which recently added the possibility of ordering a vegan pancake! They have a vegan batter, you can top it with any vegan topping listed on the menu. The vegan option is not listed on the online menu, but over the phone they confirmed that they have it. At Prinsengracht in the city centre.

Big vegetarian buffet restaurant, most of the dishes are also vegan. Almond-blueberry pancakes in the breakfast/lunch buffet (open from 08:00). Located at Czaar Peterstraat, Amsterdam East.

Here they serve Dutch style pancakes, but already rolled up and cutted, the way we used to eat it when we were a child! Also vegan option with a few sweet or savoury toppings to choose from. Small place, so lucky if you find a seat. Located just off Spuistraat in the city centre.

Pancake restaurant and beer tasting room (Brouwerij Friekens) all in one. Here they have vegan American pancakes for breakfast, vegan Dutch style the rest of the day. Also child size pancakes. Located in a far corner of Amsterdam Noord but nice for a little trip! On the same grounds people are keeping some pigs for slaughter which unfortunately and disturbingly also end up on the menu, just so you know.

Large kids-friendly grand café at Watergraafsmeer. They have a seperate Dutch style pancake menu with a vegan+glutenfree pancake option, only sweet toppings are vegan.

Modern pancake restaurant at the touristic Red Light District. They also offer vegan pancake options though it’s not listed on the menu, confirmed over the phone.

Small sustainable shop / lunchroom at Negen Straatjes, they have vegan banana oat pancakes on the menu. The menu says they top it with honey though (?!) so beware.

If you know more places in Amsterdam that offer vegan pancakes, please let us know in the comments.

If reading this article makes you wanna make pancakes yourself, then check our own recipe for classic vegan Dutch pancakes!

Fun fact, eating pancakes while in Amsterdam is highly recommended by the Beastie Boys.