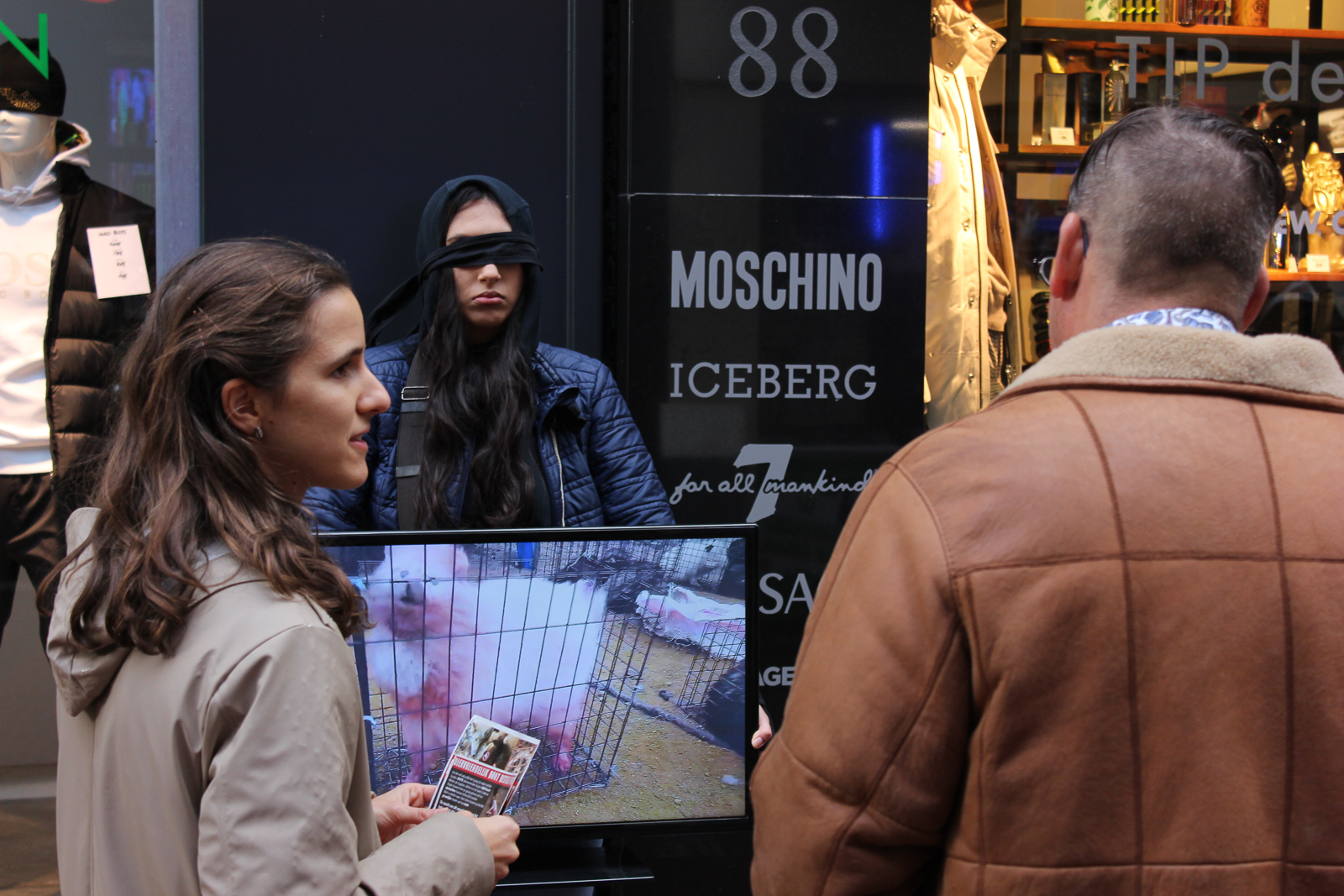 Yes fur farming is by now finally illegal in the Netherlands, which is a huge victory. But selling fur is still allowed, just have a look in the streets and you will notice quite a lot of people wearing jackets with fur collars. A group of local animal rights activists decided something needs to be done about it! The rest of the winter they will be doing actions in front of shops selling fur – to put pressure on the stores and to reach out to people passing by in the street. I catch up with activist Tim during one of these.

In recent years, many big retailers declared they will stop selling fur (e.g. Bijenkorf, Zara) and also many big fashion labels announced they will no longer use fur in their clothes (e.g. Gucci, Balenciaga, Saint Laurent). In Amsterdam, the city council recently banned the sale of fur on markets (like the Albert Cuyp) starting January 2022. Still a small number of stores in Amsterdam keep on selling fur, Tim estimates between 8-10 shops. Examples from stores selling fur in the centre include Tip de Bruin, Frochella, StyleItaly, JHP Fashion and Lederpaleis. 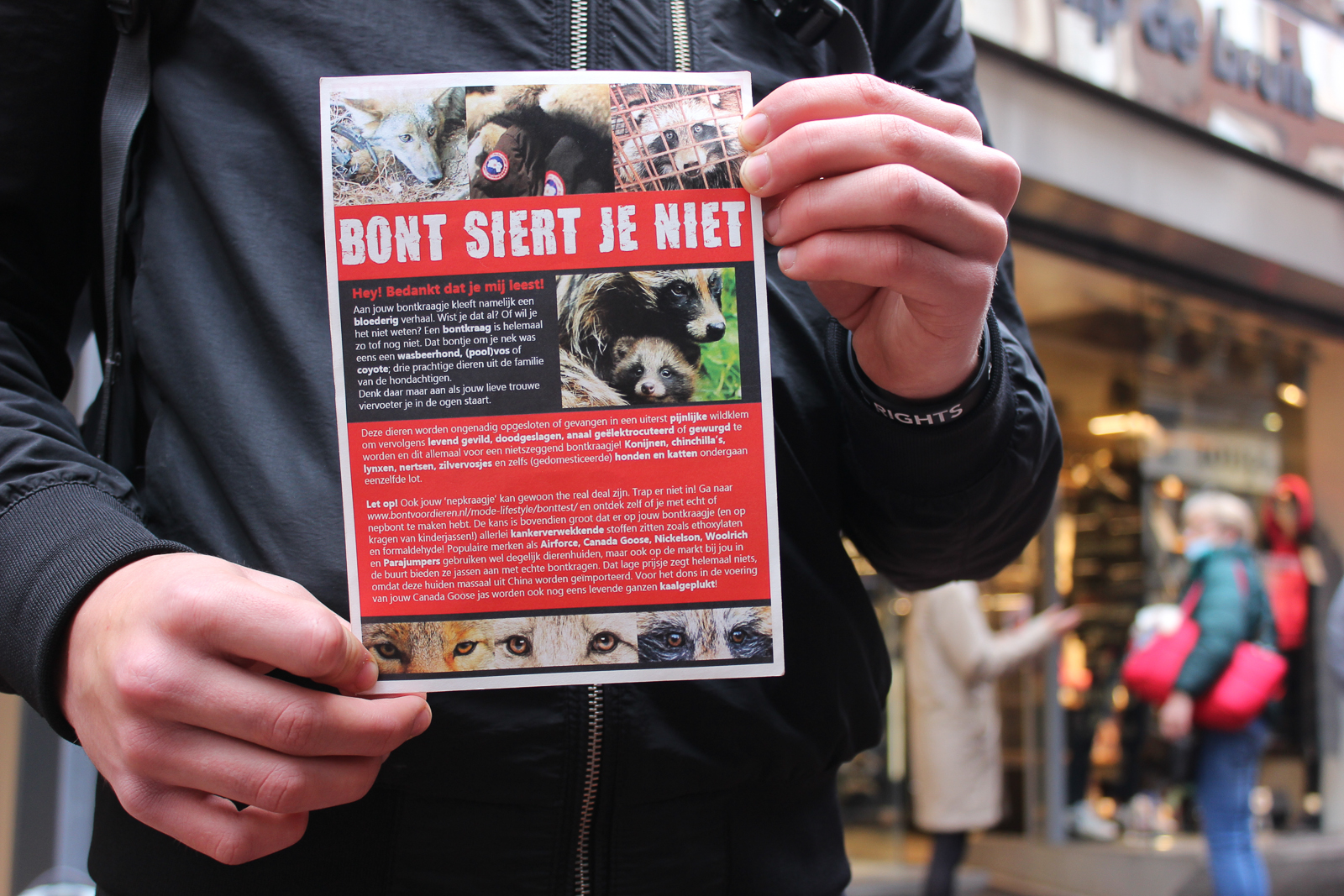 One of the animals used most for fur are raccoon dogs, bred in Asia. They look similar to raccoons but are related to dogs. “The absurd thing about fur is, you’ll often see a woman wearing a fur collar, with a small dog on her side. So you have two animals who are very much alike. The one is sleeping in your bed and gets all the love in the world, while the other you just nail to your jacket. This is really caused by ignorance about the topic.”

The general public reacts usually very well to their actions because public opinion already agrees. If you would show images of slaughterhouses it’s different, because people eat meat themselves, says Tim. From the people who wear fur half of them don’t want to know about it and quickly walk by. The other half is shocked and interested when they learn more about it.

People who wear fur of course don’t identify as someone who mistreats animals. “It’s very important not to give people the feeling that you’re attacking them. “I’m not attacking you, but did you know this?”, approach them with an open attitude, it always works well. If you approach someone very disarming, they will not get angry. If you say “Hey you murderer” of course he’s going to say “Who the fuck are you man?” That’s the social-psychological thing you do with street activism. And gradually you get better at it.” Most people just never thought about it or didn’t know it, so by educating them you can really make them think different. This direct result is what makes street activism rewarding says Tim.

To join the outreach actions, just send a message to their Instagram page!

On the website of Bont voor Dieren you can find a list of shops and brands still using fur. 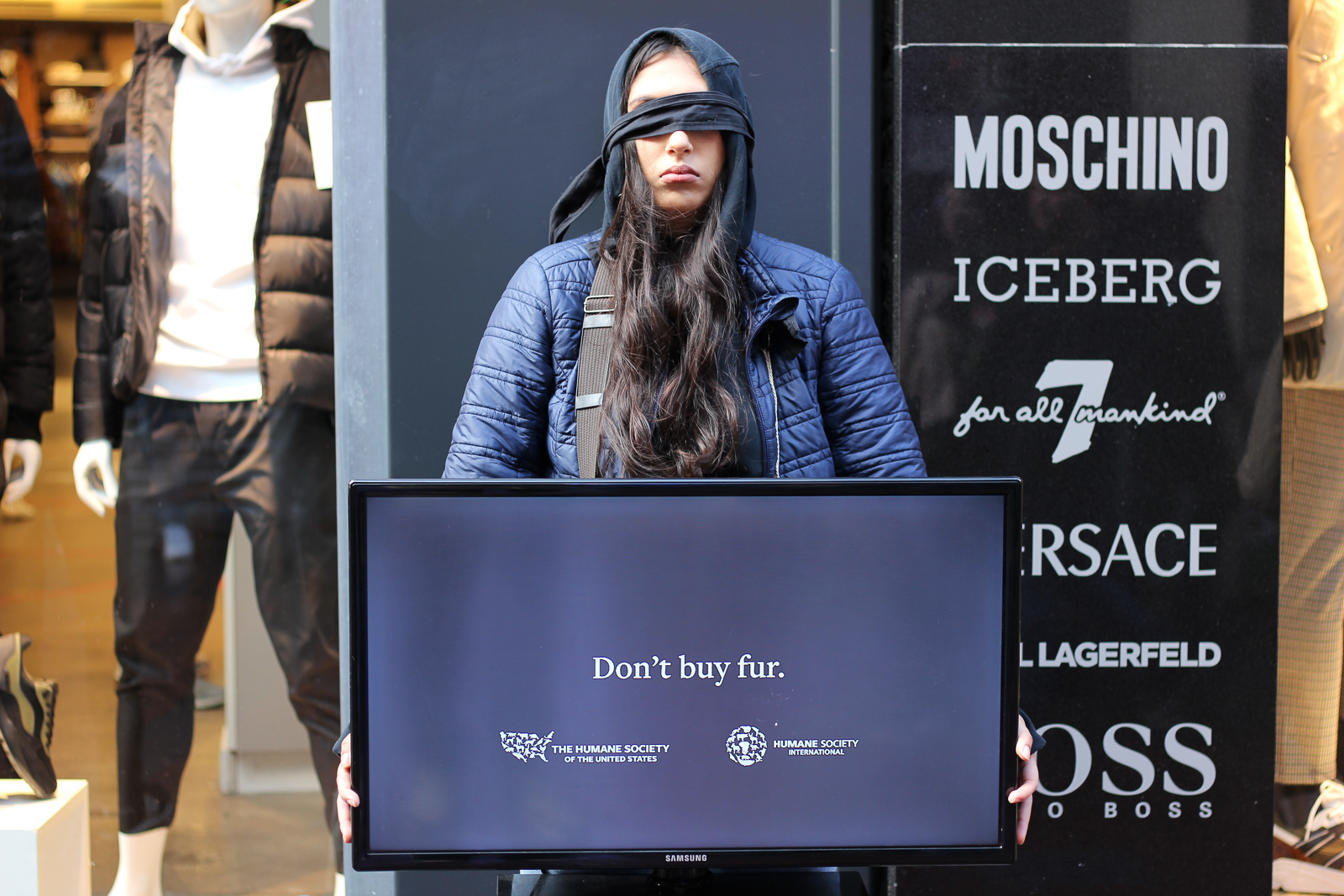 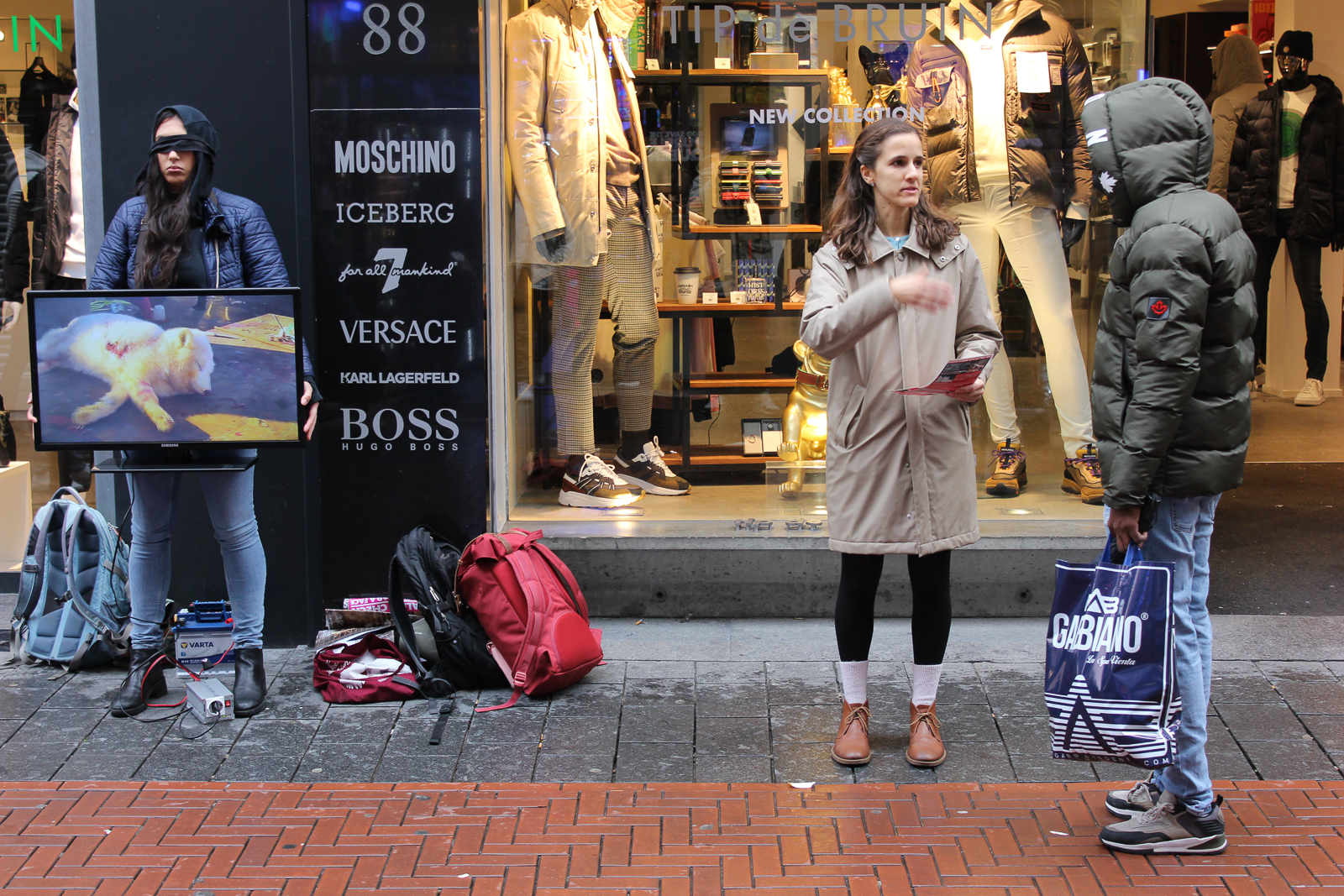 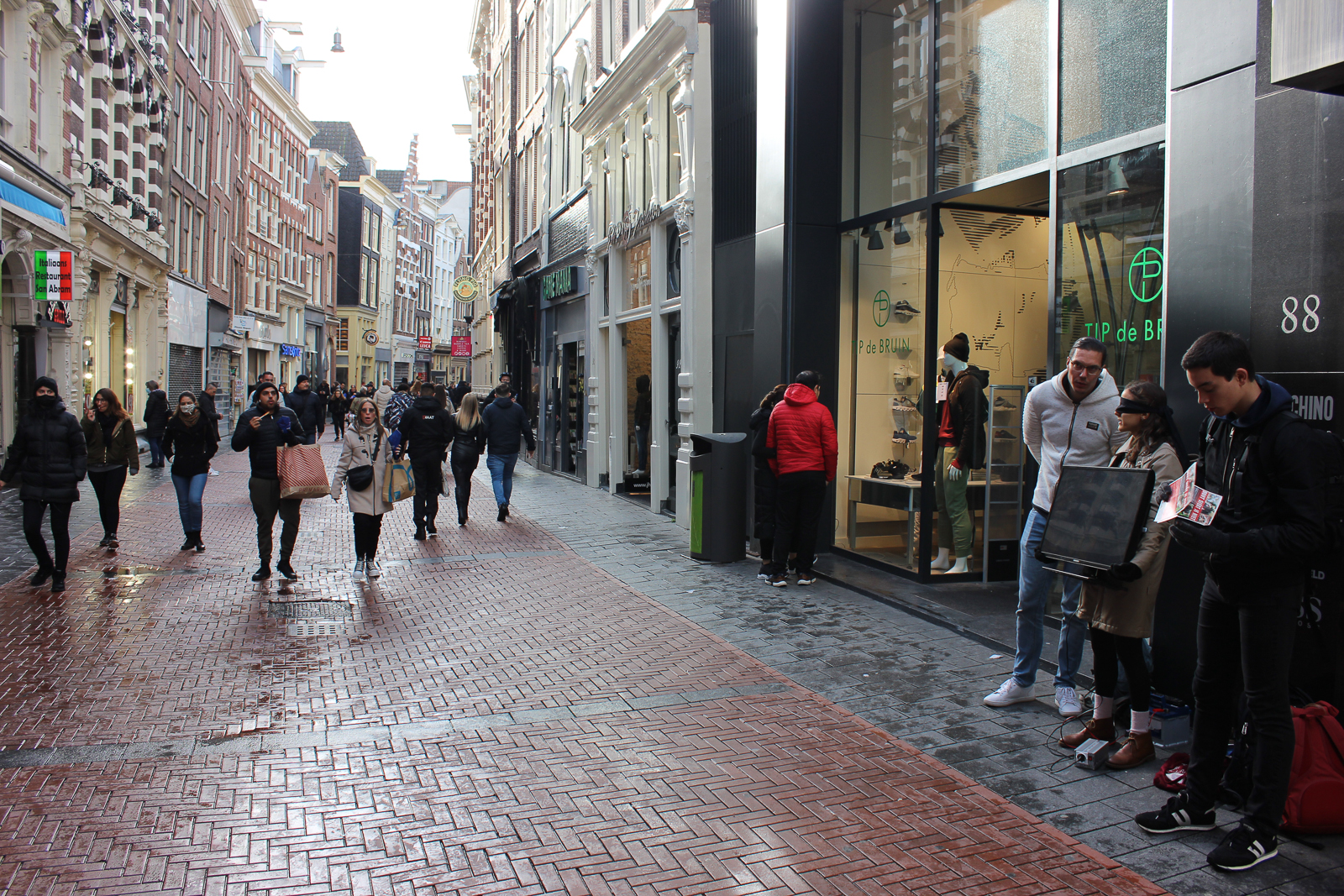